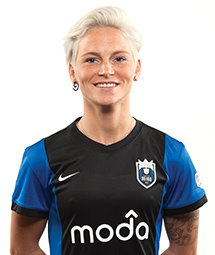 Here’s how evil it is that Kim Little and Jessica Fishlock — two of the best midfielders in the world, let alone the NWSL — are on the same team: Even if you have teams with midfielders who can contain the Little problem, Fishlock can just surge out of her shuttler’s role, exploit the areas you’ve exposed, and flash the talents that made her one of the league’s best players last season. With two such dangerous, complete players in the same team, your reward for containing with one is ceding room for the other.

Consider Fishlock’s goal on Sunday against Western New York. With her team having more trouble than usual creating chances, Fishlock took advantage of the attention Western New York gave Little to get into the Flash’s penalty area. Queue Stephanie Cox’s pinpoint cross, a deceptively good finish, and Seattle had its early equalizer.

It was the high point of Fishlock’s week, but it also showcased why the Seattle midfield has the league’s defining force. So much of the threesome’s success is about Little, Fishlock, and Winters reading each other, knowing that Little is the attacking tip while Winters is the defensive anchor. Fishlock is the more malleable part, bridging that gap. As opponents adjust, she does, too.

On Sunday in Seattle, that meant an opportunity to get onto the scoresheet. Midweek against Kansas City, that meant helping Winters and looking for spots to even out the numbers game Little was fighting higher up. They type of play may not produce league-leading numbers, but without Fishlock’s play over the last seven days, Seattle would not have preserved the “0” in its loss column.

May 21, 2014
Washington Spirit 3, Sky Blue FC 3 – Some soft hands from Jillian Loyden and a disputed penalty called against Jonelle Filigno saw Sky Blue’s late 3-1 late disappear, with Washington salvaging a point from a match they were expected to win.
FC Kansas City 1, Seattle Reign FC 1 – Seattle came into the game with a perfect record but fell behind when Hope Solo couldn’t prevent Amy Rodriguez’s seventh goal of the season. Kim Little equalized from the spot two minutes later, pulling her even with Rodriguez at the top of the league’s scoring chart, but the Reign still dropped their first points of 2014.
Portland Thorns FC 2, Western New York Flash 1 – The Thorns’ best performance of the season saw goals from Allie Long and Jessica McDonald put the team up two just after halftime. McCall Zerboni’s response and a late Flash surge briefly put the match in doubt, but missing Angela Salem, Western New York couldn’t salvage a result in Portland.

May 24, 2014
Portland Thorns FC 0, Sky Blue FC 1 – For the second year in a row, Sky Blue executes a smash-and-grab in Portland, with Kelley O’Hara’s late header giving the visitors the upset at Providence Park.

May 26, 2014
Washington Spirit 3, Houston Dash 2 – A dramatic late winner from Christine Nairn left Houston with too little time to find a third equalizer, with a rare multi-goal performance from the goal-shy Dash going for naught in Maryland.

1. The NWSL is back on television – Six regular season games and all three postseason matches make up the league’s new package with ESPN, only unlike last year’s pact with FOX that distributed games to a number of different venues, ESPN is focusing on a few, select places: Houston, Portland, Western New York. Though three games will be on ESPN3, the other matches, including the playoff games, will be on ESPN2. The league’s convinced a new partner of the product’s value.

2. Tyresö’s coming – The Swedish club’s stars made thin amends for last Thursday’s loss with a weekend win over Damallsvenskan-leading Rosengård – a game that served as the send off for the likes of Christen Press, Whitney Engen, Meghan Klingenberg, and Veronica Boquete (among others). Those stars have now departed the fledgling club for their NWSL destinations: Chicago (Press); Houston (Engen, Klingenberg); and Portland (Boquete).

Paul Riley has eagerly awaited his reunion with Boquete since acquiring her rights from the Flash, while Rory Dames gets the biggest goal-scoring threat he’s had during his time with the Red Stars.

If teams start bracing against the influence of Little and Fishlock, the performance of Sydney Leroux and Beverly Goebel becomes more important. As do the returns of Nahomi Kawasumi and Megan Rapinoe.

4. Western New York knows what they’re up against – The Flash’s Cascadia road trip wouldn’t look so bad had they beat Washington before their West Coast excursion. With that loss to the Spirit, however, Western New York has one point from its last three games.

Results on the field, however, weren’t that bad. The Flash were within minutes of handing Seattle its first loss of the season, while in Portland, a down performance without one of the team’s key players (Salem) still nearly produced a result.

Western New York is in sixth place, but there’s no reason to think they’re the league’s sixth-best team. As Sunday showed, they’re much better than that.

Technically Morgan, yet to play a minute this year, was available to play, dressing in Paul Riley’s 18 to face visiting Sky Blue. When she didn’t come on late as the Thorns chased a 1-0 lead, it was clear she was never meant to play. Whether Paulson, Portland’s owner, knew that or not is unclear. Some fans felt trolled.

It’s more likely Paulson, 24 hours before the game, thought his star might play and sent out an honest, unintentional mistake. That the team came was coming off a low, Wednesday night crowd (by their standards: 10,920) aroused suspicions, as did a Timbers kickoff time in New York that could have kept some soccer fans in bars (4:00 p.m. PT, three hours before the Thorns game).

Regardless, whereas at one time she was out indefinitely, Morgan is inching closer toward a Portland return, one that should open the tap on the team’s incoming talent. The next time Paulson tweets about his biggest star, she’ll likely be on the field.

Wednesday, May 28
Sky Blue FC vs. Chicago Red Stars – With Kelley O’Hara seemingly liberated from her defensive responsibilities, Sky Blue has a scorer that can help Monica Ocampo. That probably doesn’t put them on Chicago’s level, but it will present a greater challenge than Boston or Houston.

Boston Breakers vs. Portland Thorns FC – Portland’s eighth game in three days will give Boston a chance to claim rare points, particularly given the Thorns’ struggles converting chances into goals. Boston’s defense, however, well give Portland an opportunity to find somebody to beyond Allie Long and Jessica McDonald to score goals.

Saturday, May 31
Western New York vs. Houston Dash – The way to make a tough stretch of games into a bonafide slump: Play down to your competition. Coming off a good but disappointing game against Seattle, Western New York needs to take care of business against the Dash.

Boston Breakers vs. Washington Spirit – On the road for the first time since May 11, Washington will again assume the favorite’s mantle that troubled them slightly last week. Witd a full week’s rest against a Breakers’ team that played mid-week, the normally fast Diana Matheson and Crystal Dunn may seem that much quicker on that hard Harvard surface.