A massive thanks to FourFourTwo’s amazing stat app StatsZone for the dashboards in this article.

Jurgen Klinsmann had a pretty clear game plan going into the game with Belgium.

His megaphone was the lineup card, and the message was “Your creativity won’t beat us through the middle.”

By starting Geoff Cameron as midfield cover instead of Kyle Beckerman, Klinsmann surprised many around the country, but it’s not hard to figure out why he did it.

One name quite literally rises above all others in the Belgian midfield: Marouane Fellaini.

With the aerial presence of the Belgian afro roaming the pitch, Klinsmann made a very significant change to the lineup in an attempt to box in the big Manchester United midfielder and keep him at bay.

Beckerman isn’t very good in the air, and this is made abundantly clear in the first few USA matches.  Throughout their first three World Cup games, Beckerman had a total of one headed clearance and was 1/2 in aerial duels. It’s not that he failed miserably at it, but he’s flat out not a jumper, much preferring to have his feet on the ground. To compare, Cameron by far out-jumped Beckerman’s entire tournament against Belgium alone, with five headed clearances and 4/5 in aerial duels.

Knowing the threat Fellaini – and even Axel Witsel, to an extent – poses in the air, Klinsmann chose instead to slot Geoff Cameron into defensive midfield. Essentially a third central defender who has ability on the ball, Cameron was a valid choice to not only lock down Fellaini but also relieve Michael Bradley up front somewhat in the creativity department.

Except, with the added aerial coverage came a massive drop-off in distributive ability, and that was a lethal omission in the US midfield. More on that in a bit.

First, let’s first overview how Cameron’s presence actually worked quite well in both holding Fellaini down in the air and clogging the passing lanes in the middle. 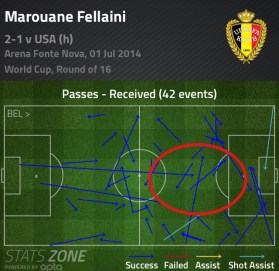 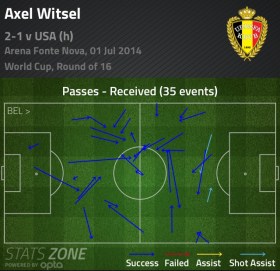 As you can see, there’s a  nice gap in front of the 18-yard box where Cameron patrolled. Fellaini only received five passes in that area all match (the red circle) a positive for the United States.

Witsel had more service in that area, but the US were still successful in scattering him around the pitch, something Russia failed to do during their group-stage match.  As a result, against Russia, Witsel completed all 34 passes he attempted and was an engine against that stout Russian back line.  Against the US, he made a few mistakes in the midfield and overall had less of an influence.

Also interesting, against Russia Fellaini was a favorite target of goalkeeper Thibaut Courtois on goal kicks, with the midfielder able to get to the long balls at will.  Courtois hooked up with Fellaini eight times in that match, a staggering amount and major part of his service. Against the United States with Cameron often man-marking Fellaini, he latched onto just twice.

The presence of Cameron did a good job of spreading out the Belgian players, as you can see here on the player influence chart (essentially an overlay of each player’s heatmap).  Against Russia, the Belgian midfielders were clogging the middle and producing centrally, whereas against the United States they themselves were forced spread out, thus decreasing their ability to penetrate. 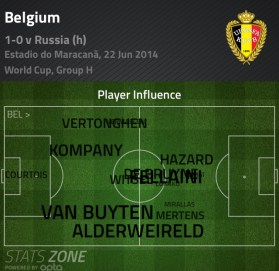 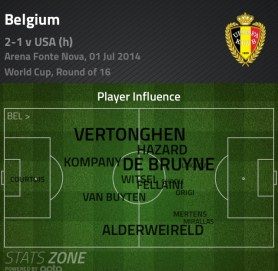 In addition, Cameron beat Fellaini one-on-one in the air in two of their three recorded midfield duels, which was a positive considering that was the main purpose for his inclusion.

So in this way, Geoff Cameron’s presence was a positive. But there was a downside that proved deadly to the United States.

Without Beckerman’s superior distribution skills, Cameron and others made countless mistakes in the midfield and gave away precious possession much too often.

The most surprising number to come out of this match is the possession split.  Through regulation, the US maintained a 50-50 split of possession with Belgium, despite their ability to pepper Tim Howard’s goal compared to precious few opportunities for the Americans.  That surprising amount of possession for the US mostly came while attempting to build from the back, which often led to giveaways in the midfield.

A look at Cameron’s passing chart compared with Beckerman’s control of build-up play against Portugal and it’s easy to see how much the Real Salt Lake man was missed. 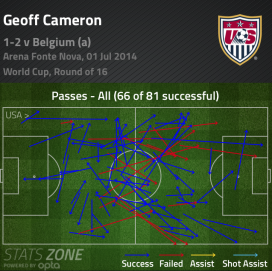 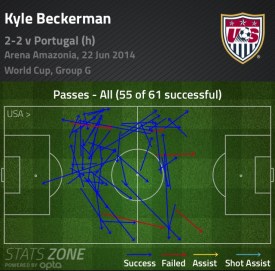 While Beckerman’s passing doesn’t appear to be all that creative on the chart, there’s one thing that stands out: it’s mistake-free. Pair that with the 42-of-45 performance he put out against Germany, and it’s clear why the US failed to maintain possession against Belgium without him.

66-of-81 is below what the US would like from that position, and you can see countless giveaways in the middle third.

Not only that, but Cameron is scattered across the pitch as he looked to roam further up field. That’s not necessarily a bad thing, considering it allows Michael Bradley – playing out of position farther forward than he is used to – to ease back a bit and cover.

Unfortunately, none of that worked. Cameron didn’t have a single chance created despite relatively positive passing in the final third, and Bradley’s defensive presence was non-existent (0 clearances, 0 interceptions, 2/5 tackling).

This is somewhat harsh on Cameron. Jermaine Jones had a very poor passing performance with plenty of giveaways in the midfield as well, and Graham Zusi was a mess down the right.  But things seemed like they were missing an anchor, and that’s because it was on the bench.

The result of all these giveaways? 39 shots by Belgium, 18 of them on target. Tim Howard got to a record 16 of them, but the onslaught was too much.

Its nearly impossible to fully blame Klinsmann for this outcome; hindsight is 20/20, and his priority on aerial coverage over that of a conservative passing approach is something many would prefer. But in this case, after the match, we see the decision was incorrect.