It’s never easy to craft a ‘Top 10 players to watch’ list, mainly because it falls into that amorphous space among lists concerning ‘Top 10 players’, ‘Top 10 transfers’ and ‘Top 10 dark horses’. So we dug deep, removed the ‘Top 10’ aspect and have put together the perfect list of Premier League players you need to keep your eye on in 2014/15.

Of course, the list is still a bit subjective but if you disagree or feel we’ve lost the plot, have your say in the comments. Regardless, the most important point remains – the Premier League returns in only five days. Get in!

If one were to single out where Chelsea manager Jose Mourinho got it wrong last year most would agree it was at striker where the trio of Samuel Eto’o, Fernando Torres and Demba Ba proved lame. So this summer the Portuguese manager set out to find a powerful, clinical, hulking striker to play the role of Didier Drogba 2.0. Diego Costa, who scored 36 goals in all comps last year for Atletico Madrid, has been donned that man. And, just in case the Brazilian striker doesn’t come good, Mourinho went out and signed Drogba 1.0 as well (although he’s already caught the injury bug).

In one of the most high-powered signings of the summer, Arsenal broke the bank to bring Alexis Sanchez to North London. Similar to the deal for Mesut Ozil last year, it was one that Arsenal didn’t have to make out of necessity but instead, simply couldn’t pass up. Sanchez enjoyed a brilliant World Cup for Chile and made no secret of his desire to leave Barcelona – where he, like Cesc Fabregas, was under appreciated – to play under Arsene Wenger. How the gaffer will line up his stacked squad is anyone’s guess but expect Sanchez to pop up on the right and left wings, an attacking center midfielder and as a striker.

There isn’t a player in the league with more pressure on his shoulders than Luke Shaw, having arrived at Old Trafford this summer on a $50 million dollar transfer fee. For a 19-year-old left back, that’s some serious loot. Then again, Shaw is a big talent, both literally and metaphorically. The question becomes, what kind of impact will he have in year one? Louis van Gaal has already cut him down by publicly noting his lack of fitness and handing Ashley Young a fair shot to win the left-back spot. And, shockingly, the former Villa man has looked quite good in pre-season. Tough times for Shaw but watching him overcome the odds will be a joy.

Can’t wait to see Fabregas back on Premier League pitches but in Chelsea blue?! That will take some getting used to. The former Arsenal midfielder arrived at Stamford Bridge following a three-year stint at Barcelona where his qualities were not fully appreciated. Now, back on English soil, pundits will be looking to see if Cesc can re-capture the reputation he gained at the Emirates as one of the best play-makers in the world. 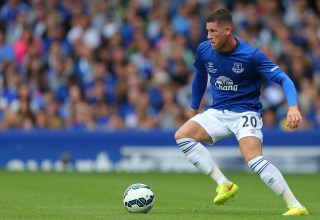 Everton made headlines this summer with the $47 million purchase of Romelu Lukaku from Chelsea but equally significant was the re-signing of midfielder Ross Barkley to a new four year deal at the club. Barkley scored seven goals in 38 appearances for Everton last season, beasting opponents with a combination of power, skill and a knack for big goals.

Rumors were rife with Manchester United and Chelsea were in to sign the 20-year-old maestro but in the end Everton was too close to his heart: “This contract means everything for me. It is my dream to play for Everton. This is the club I love and I see it as home.”

Stevan Jovetic struggled with injury in his first season at City but has been fantastic in this summer’s pre-season. With injuries to Sergio Aguero and Alvaro Negredo heading into the start of the season, look for Jovetic to partner Edin Dzeko up top and to finally make his mark in the Premier League. If the Montenegrin comes good for the Citizens early on, look for him to move out to the wing once Aguero returns from injury.

Feels like ages since West Ham have had a healthy, proper striker ready to go. Last year they banked on Andy Carroll before injuries struck him down leaving the cupboard bare. This year, the Hammers smartly hedged Carroll (who recently injured himself again) by dropping $20 million on Ecuadorian striker Enner Valencia. The former Pachuca man (18 goals in 23 matches) dazzled in the World Cup, scoring three goals and proving himself a menace to opposition with blazing speed and incredible aerial ability. Here’s to hoping West Ham’s new gem can stay healthy.

Keep Aaron Ramsey healthy and Arsenal are realistic title contenders. At the beginning of last season the Welsh Wizard was brilliant for the Gunners, using his silky skills to playmake throughout the midfield while scoring eight league goals before the end of November. But in December, injury struck Ramsey and down went Arsenal’s title hopes. This summer he’s healthy and looking as lively as ever with Goonah fans everywhere frothing at the mouth over the prospect of Ramsey, Ozil and Sanchez linking up together. 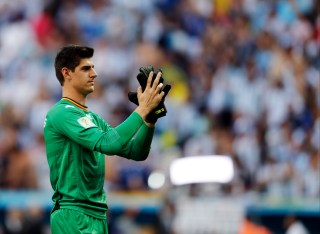 After two years on loan at Atletico Madrid, the gigantic Belgian returns to Chelsea where one of the most compelling goalkeeping battles of all time is set to commence: Thibaut Courtois v. Petr Cech. Courtois’ size (6′ 7″), split-second reactions and soft hands have seen him rise the ranks of goalkeepers, with many believing he’s No. 2 just behind Bayern Munich’s Manuel Neuer. But what about Cech? He’s long been one of, if not the best, keepers in the Premier League and he’s not going down without a battle. How Mourinho decides to divide up the playing time and each player’s reaction towards that decision will be an incredibly compelling storyline for the entire season.

After multiple attempts to sign Herrera last year, United finally landed the deep-lying playmaker from Athletic Bilbao and he already looks at home in the Red Devils midfield. Lively, with brilliant technique and passing ability, Herrera will play alongside Michael Carrick and, at times, Darren Fletcher, to provide the creative link to Juan Mata. A fantastic signing for Louis van Gaal.