And England’s Raheem Sterling thought he was tired.

Estonia left back Artur Pikk made the switch from one uniform to another on Sunday, leaving his mandatory national military service to suit up for his country against England.

Then after the game, he gave interviews in his army uniform so as not to miss his curfew at the barracks.

Pikk, who plays his club football for FC Levadia Tallinn, had played less than one minute of international football for the Estonian national team prior to making his full debut against England, having come on as a 93rd-minute sub in their 2-1 friendly victory over Tajikistan back in June. 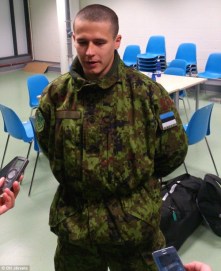 The pot shots at Sterling are a little ridiculous and overblown, but the comparison is pretty funny considering Pikk’s conundrum. In any event, it’s safe to say Pikk is representing his country on several levels.