Everton beat Aston Villa 3-0 on Saturday at Goodison Park, as the Toffees secured their first home win of the PL season.

Phil Jagielka headed home in the first half, then Romelu Lukaku squirmed a shot under USMNT ‘keeper Brad Guzan as he lost the battle of the American goalkeepers to Tim Howard once again.

Coleman added a third late on to seal the win, with Everton up to 13th with nine points and Aston Villa in 12th after fourth-straight defeats in which they have failed to score. 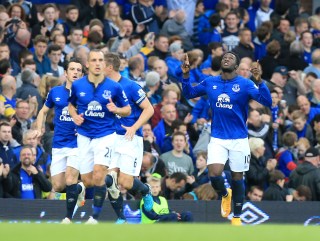 The Toffees went ahead early on as Baines crossed the ball in and Jagielka powered home a header. 1-0 to Everton. The home side pushed hard for a second but Brad Guzan made some good stops in goal for Villa, with the Toffees going in ahead at the break.

In the 48th minute Lukaku made it 2-0 and this won’t be a goal Guzan will want to see back in a hurry. The big Belgian striker sent in a low shot that squirmed underneath Guzan to extend the Toffees’ lead in the battle between the two USMNT ‘keepers.

5 – Leighton Baines has now assisted five PL goals this season, one more than he managed in the whole of 2013-14. Form.

Christian Benteke hit the crossbar twice but was adjudged to have pushed Antolin Alcaraz, with Villa struggling to create chances going forward.

They tested Tim Howard in the 72nd minute but Andreas Weimann couldn’t get enough purchase on his close-ranger header after a wicked delivery from the left.

Everton wrapped up all three points as a quick free-kick found Baines and he squared the ball across for his fellow full back Coleman to tap home and round off a first home win of the PL season for the Toffees.