Tensions were so high between SC Bastia – a club located on the island of Corsica – and Nice, that away fans weren’t allowed at Allianz Riviera when Bastia came to visit. In fact, even clothing bearing Bastia’s colors were banned as well.

Corsica is an island in the Mediterranean Sea, formerly an Italian territory now belonging to France.

So when Bastia won 1-0 on Saturday, reserve goalkeeper Jean-Louis Leca decided to whip out a Corsican flag at the full-time whistle (pictured, above) and the home fans didn’t take kindly. Nice captain Didier Digard apparently tried to stop Leca, but to no avail.

About 100 fans rushed the pitch and violence ensued, with security barely able to keep fans at bay. Police had to escort the Bastia players into the locker rooms, which they thankfully did before any reported injuries occurred.

Twelve fans were arrested, and four were placed in a drunk tank overnight, according to French publication Le Monde. Police said an investigation was under way and would utilize security camera footage to figure out where fans came from and who was on the pitch.

President of the French league Federic Thiriez said it was “everything that we don’t want to see in football,” and that there would be “inevitable sanctions” for the clubs.

The incident came on the heels of fan violence on the pitch at a Euro 2015 qualifying match Serbia and Albania after a flag was displayed. In both these incidents, away fans were not allowed at the match due to fears of violence, but it didn’t halt incidents taking place.

This is also not the first time fans got violent at Allianz Riviera, with Nice and St. Etienne supporters clashing after away fans scaled a barrier between the supporter sections. It has raised questions about the safety of the stadium with France hosting Euro 2016.

Here are some images of the scene on the pitch at Allianz Riviera: 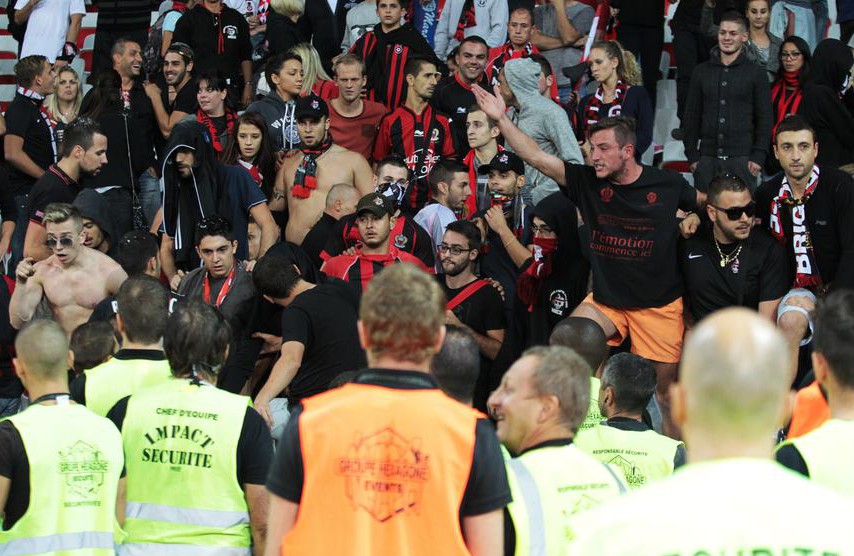