LONDON – QPR should have been 3-0 up at half time against Liverpool on Sunday at Loftus Road, but wasteful finishing meant the R’s were their own worst enemy in a devastating 3-2 defeat at home. They have now lost six of their opening eight games.

Liverpool left West London with all three points after a less than inspiring performance from the Reds, but what did we learn?

Gerrard consigned to life in the holding role

Midway through the first half after Gerrard had hardly seen any of the ball in an advanced role playing underneath the ineffective Mario Balotelli, he dropped into a deeper role and drilled a rasping 30-yard ball towards Balotelli which drifted out for a goal kick amid ironic cheers from the home fans. Just before the break Gerrard received the ball inside the box and wriggled free of two challenges before side footing the ball just wide of the post. It was that kind of day for Liverpool’s captain.

After re-inventing himself in a deep-lying role last season, the 34-year-old was asked to be the attacking hub of Liverpool by Brendan Rodgers on Sunday. Gerrard looked uncomfortable, as did Liverpool’s entire midfield, as Leroy Fer, Sandro and Karl Henry dominated. Emre Can and Jordan Henderson lost the engine room battle which Gerrard usually patrols with ease.

I understand why Gerrard was pushed forward: to try and get the best out of Mario Balotelli. But it didn’t work and by half time Rodgers swapped Gerrard and Henderson around. Gerrard no longer has the legs to drive Liverpool forward in attack and the Reds looked solid with their skipper anchoring things in midfield. From now until he retires, Gerrard belongs in the holding role. 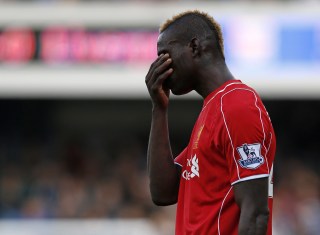 After a bright and bold start to the game from the home side, Charlie Austin bulldozed through Liverpool’s defense in the ninth minute leaving two men in a heap before Simon Mignolet blocked his shot and the English striker steered the ball into the side-netting. It was an early warning sign for the Reds which they didn’t take any notice of. Eventually Eduardo Vargas punished Liverpool’s inability to defend aerials balls as the Reds conceded two goals late on in a pulsating clash.

At every opportunity they got, QPR clipped balls into Bobby Zamora and Austin to unnerve Martin Skretl and Dejan Lovren, It worked. Big time. How will the Reds cope with Cristiano Ronaldo, Gareth Bale, Karim Benzema and James Rodriguez next Wednesday in the UEFA Champions League? Austin and Zamora ran the Reds ragged.

Meanwhile at the other end, Mario Balotelli has now gone six Premier League games without a goal for Liverpool and he had yet another off-day leading the line. Rubbing his head after an aerial duel with Richard Dunne, slipping over in the second half after being called offside, throwing his arms in the air and tame shots from distance was all you got from ‘Super Mario’ on Sunday.

In the 61st minute, the worst moment came as Lallana went clean through and his shot was saved by Alex McCarthy. The rebound fell to Balotelli six-yards out but the Italian sidefooted the ball over the bar with no pressure on him. The jeers from QPR’s fans must have been deafening for Balotelli.His growing pains continue for the Reds.

When Liverpool took the lead in the 67th minute via Richard Dunne’s own goal, there was a collective groan inside Loftus Road. The home fans knew this was coming. QPR were punished for their wasteful nature in front of goal in the 3-2 defeat. Substitute Vargas finally showed his teammates how to finish with two goals from close range. QPR deserved a point, at least, and should have scored four or five on Sunday. Their inability to finish killed them.

In the first half alone Fer hit the crossbar twice, first with a shot and then a header (he should have buried the first), plus Austin put one in the side-netting. QPR could, and probably should, have been 3-0 up at half time. The fact that they weren’t meant anxiety levels grew inside Loftus Road before the game-winning moment arrived for Liverpool deep into stoppage time as Steven Caulker turned Raheem Sterling’s cross into his own net.

3 – Leroy Fer has struck the woodwork three times so far this season, the most in the Premier League. Rattle.

Throughout the match Zamora bullied Liverpool’s backline and Fer was reminiscent of Lionel Messi. Seriously. Flick, tricks and powerful running, the Dutch midfielder had it all apart from that Midas touch in front of goal. QPR have scored just six goals this season, the second-lowest total in the PL. If they don’t become more ruthless in front of goal, relegation beckons.