Perhaps it isn’t the sexiest year for rookies in Major League Soccer, at least in terms of high-flying names in high-profile positions on high-publicized teams.

But the rookie crop of 2014 has yielded a number of players we can expect to see in the league for a long, long time. Defenders Steve Birnbaum (DC United) and Nick Hagglund (Toronto FC) were stalwarts for teams with very different fortunes, and look to have much mettle. Hagglund’s played more minutes than Birnbaum, but the DC defense has been better.

Chicago’s Harrison “Harry” Shipp has faded statistically down the stretch, and herein lies the rub; This is the longest, hardest season these players have faced. The former Notre Dame star has played a boatload of minutes and done some magnificent things. His corner kicks and crosses feel artistic at times.

But Tesho Akindele of FC Dallas has put up similar number over a shorter period of time (and what a story — not that it plays into the award — coming from the Colorado School of Mines). Should the less time on the field be a clear negative or a positive? After all, Shipp has played a bigger role in Chicago’s entire season, but Akindele busted on the scene for one of the best teams in the West.

It’s an obstacle many rookies find troubling: consistency in form and playing time. Adam Bedell (Columbus), Chris Duvall (New York) and Patrick Mullins (New England) have all fought it this season, each looking like potential ROY candidates at some point. Chivas USA’s Thomas McNamara had some early promise shot down by injury.

What do the advanced stats say? Let’s check a Squawka score or four (which as a fault does tend to favor guys who have played more minutes): 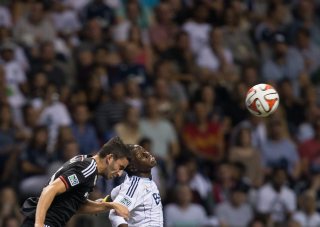 With respect to Shipp and Akindele, for us it will be on of the back line heroes.

Is it the big defender who hasn’t missed a minute since breaking into the lineup for the East’s top team?

Or is it the 10th overall pick who was a diamond in the rough season of a big money flame out?

It really comes down to stalwart defense versus a bit of a wildcard (Hagglund picked up two red cards this season, but dotted the scoresheet while Birnbaum neither netted nor assisted). You’d love the pair in your back line for the next five years.

We’ve gotta make a choice. And we’re going with Hagglund. Now let’s hope Toronto does better in their ROY’s reigning campaign than the team of last year’s model.