Seydou Doumbia scored twice to lift CSKA Moscow to a 2-1 win at the Etihad Stadium, dropping City to the basement of Group E. CSKA is second, leapfrogging City and AS Roma (The latter fell to Bayern Munich at the Allianz Arena).

Goalkeeper Igor Akinfeev made several big second-half stops to thwart a City comeback, and now the Citizens have to hope for a win against visiting Bayern on Nov. 25 and at Roma on Dec. 10.

And they’ll have to win the first without Yaya Toure or Fernandinho, both sent off in the second half of the loss. Toure scored the City goal.

Pontus Wernbloom should’ve seen a second yellow for CSKA in the second half, but was apparently misidentified by head referee Anastasios Sidiropoulos.

The fireworks started early between City and CSKA, and Yaya Toure was a big part of both.

First, Ivorian forward Doumbia ran around his countrymate Yaya to leap over Martin Demichelis and head a cross past Joe Hart in just the 2nd minute of the match.

But Yaya had the next laugh, as his swooping free kick in the 8th minute dipped over the wall and into the goal to tie the score.

Doumbia then darted past a diving Martin Demichelis to latch onto a throughball, but was forced into taking a wide shot from just outside the 18. James Milner found Sergio Aguero at the other end, only to be foiled by Russia’s No. 1 goalkeeper, Igor Akinfeev.

Then the 35th minute found Doumbia darting back onside to make the most of a Gael Clichy hiccup, blasting a low shot to the right of Hart. It was 2-1 to the visitors at the Etihad. 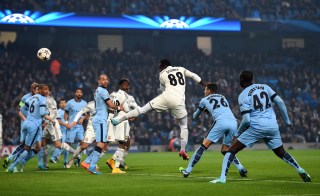 The second half found Manuel Pellegrini making some adjustments. On came Samir Nasri and Fernandinho as City searched for an equalizer.

But it was Milner and Toure who brought the danger first. A 62nd minute pass from the latter to the former forced a great leg save from Akinfeev.

Fernandinho was not a wondrous substitution, but his actions were as he picked up two yellow cards in a span of nine minutes to send City down to 10 men with 20 minutes to play.

Then Toure took a second yellow himself, to send City down to 9 men. That didn’t stop the silly fouls for the English side, which had clearly lost its cool.

And when the crowd though Aguero had won a 90th minute penalty, he was given a yellow card for diving.