The good news for USMNT player Timmy Chandler is he was again in the starting lineup for Eintracht Frankfurt on Saturday. The bad news is that Bayern Munich was in town and firing on all cylinders.

Thomas Mueller nabbed a goal in 22nd minute and added two in the second half, with Xherdan Shaqiri also scoring as Bayern rolled to a 4-0 win.

The Bavarians out shot Frankfurt 19-6, and opened up a 7-point lead on Wolfsburg and Monchengladbach. The joint-second place clubs play Sunday morning matches this week.

Chandler picked up a yellow card and played all 90 minutes at right back.

Hoffenheim 3-4 FC Koln
Six goals before halftime had the crowd at fever pitch for the second half, but the only goal in the final 45 came courtesy of Pawel Olkowski, who completed his brace and lifted the visitors to victory in the 83rd minute. Roberto Firmino recorded a brace of his own for Hoffenheim, which allowed Hannover to leapfrog them for fourth in the table.

Werder Bremen 2-0 Stuttgart
It was an even match overall, but Bremen pulled out of the relegation zone on goals from Sebastian Prodl and Fin Bartels. Stuttgart out-passes Bremen 474-224, but apparently 250 passes are not the difference between victory and defeat.

Hertha Berlin 0-2 Hannover
A Jimmy Briand goal in the first half and Hiroshi Kiyotake tally in the second lifted Hannover into fourth place in the Bundesliga. USMNT defender John Anthony Brooks was a 55th minute sub and took a 66th minute yellow for the hosts, now just two points ahead of the drop. 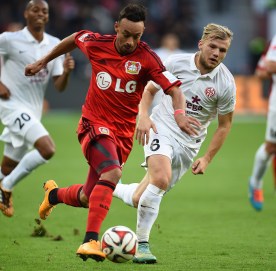 Elsewhere
FC Augsburg 3-0 Paderborn – Hosts up to second thanks in part to Tobias Werner brace.
SC Freiburg 2-0 Schalke – Visitors suffer from Euro lag as hosts jump out of the basement.
Bayer Leverkusen 0-0 Mainz – Bayer out-attempted the visitor 24-6, including six each from Karim Bellarabi (pictured, left) and Hakan Calhanoglu.
Wolfsburg vs. Hamburger – 930am ET Sunday
Borussia Dortmund vs. Borussia Monchengladbach – 1130am ET Sunday

If Dortmund cannot snare a win from its match against Monchengladbach on Sunday, the UEFA Champions League side will finish the weekend in the Bundesliga basement. Wow.