A sloppy, dreary, wet day at Loftus Road was met by a game of the same sort for 70 minutes before QPR and Manchester City staged an exciting final stanza in London.

QPR is in 19th place with 8 points, while that same figure separates third place City from first place Chelsea. Southampton is in second, four points ahead of Manchester City.

Goals from Austin and Aguero had things even at halftime, though the Loftus Road crowd felt aggrieved at a pair of Austin goals that did not count (one for offsides, the other for a double-hit goal kick from Joe Hart). Here’s what we were saying at halftime.

The first few minutes of the second half made it clear that City back on the front foot, with multiple searching balls rolling through the six without a man there to finish a second goal. 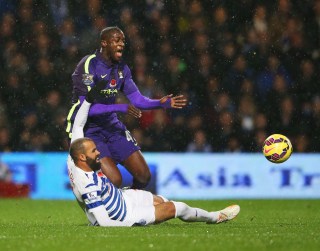 But then Bobby Zamora got on the end of an Austin cross, which took a turn off Martin Demichelis for a 76th minute own goal that gave City its second lead of the night.

And then City awoke. Aguero almost took advantage of a poor charge from Green but was cleared off the line. Toure had a strong shot blocked. James Milner had a shot turned away from Barton for a corner kick. Bacary Sagna’s low shot was deflected wide by Toure.

Aguero found the equalizer in the 83rd minute, and City refocused its search for all three points. They wouldn’t find the winner.