If you got Dan Courtemanche, Don Garber and Sunil Gulati in a room with TV executives and corporate partners, and put them under oath, it’s hard to imagine they’d have picked a different final four teams to duke it out for the right to go the MLS Cup final.

Seattle, Los Angeles, New York and New England represent a cornucopia of reasons to be fired up for the conference semifinals, with USMNT players, foreign-born stars and terrific storylines lining up together for a multi-weekend grouping of tantalizing matches. There are reasons for neutral fans from coast to coast and across either pond to tune in, which is how MLS wants it. Well, it’s the way it gets it.

It’ll be the Sounders and Galaxy on Nov. 23 and 30, with the Revolution and Red Bulls starting on the same date but completing their legs on Nov. 29. So who’s the favorite? Talk about a question with four reasonable answers, especially considering all four are coming off conference semifinals exits in 2013. 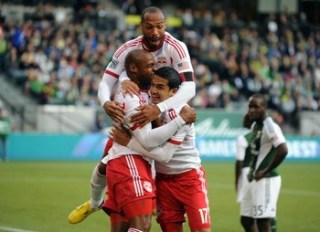 Yes, a team with a 3-1 record against the remaining teams that boasts one of the all-time greatest players in the world (Thierry Henry) and a striker who equalled the record for most goals in an MLS season (Bradley Wright-Phillips) is our least likely to win the thing. So the margins are razor-thin here, and New York did dispatch DC United by breaking down the Black-and-Red’s biggest strength: the back line. Plus Eric Alexander and Dax McCarty have quietly — outside of noisy NY — put together performances that have been instrumental to the Red Bulls success. But when it all comes down, can NY shut down Lee Nguyen and New England, then either Oba/Clint or Landon/Robbie/Gyasi? Hardest scenario to see out of the four contenders.


Since Aug. 23, the Revs have lost just once while seemingly getting better and better as a unit. That loss was to Columbus, a team they essentially rolled over in a two-legged playoff duel that began with 4 goals in Ohio to put the Crew under the knife. Jermaine Jones is a physical force with creativity to spare, while Jose Goncalves and Andrew Farrell are part of a back line that’s quite capable of holding down prolific strikers. And goalkeeper Bobby Shuttleworth has added consistency to his ability to make highlight-reel saves. Oh, and “MVLee” Nguyen. It wouldn’t be a surprise at all to see New England in the final and, as you’ll read below, we’re giving Seattle more than a few benefits of the doubt. Watch out for the Revs. 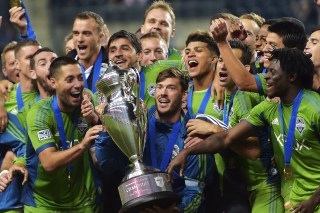 “Woah, woah, woah,” with some expletives thrown in, is likely what’s coming from Sounders supporters when they see their name here. After all, they won the U.S. Open Cup, held off L.A. for the Supporters Shield and has, after all, often been the league’s best team when all its weapons have been in the fold. Then you throw in a killer defensive effort to hold off a well-coached FC Dallas and how can they be anything but the top dog?

Well, if it makes you feel better, I had them at three until I wrote the explanation and realized Seattle should be a bit higher than New England. Clint Dempsey and Obafemi Martins are a match made in soccer heavy, while Brad Evans, Chad Marshall and DeAndre Yedlin both stringent and creative.


First off, don’t forget that Robbie Keane did not participate in the final day loss in Seattle and was hampered in the penultimate match of the season. He’s, for our money, the league’s MVP and the hurt L.A. put on Real Salt Lake on Sunday could not be mistaken as anything but a warrior’s call. That was an RSL team that knocked the Galaxy out a season before. Not this time. Not again. With Landon Donovan’s impending retirement and a few other big question marks, L.A. has the weaponry to make a bold statement under Bruce Arena: that they are one of the best attacking teams the country’s ever seen.