Saturday’s round of Euro 2016 qualifiers are neatly broken up into five matches at Noon and five more at 245pm ET.

Macedonia/Slovakia, Spain/Belarus, Switzerland/Lithuania and Montenegro/Sweden are still on the schedule, but let’s take a quick run through the matches that just finished up.

There will be parties in Liechtenstein and San Marino as the minnows picked up points against ‘superior’ competition. The latter picked up its first result in more than a decade.

The highest profile match saw England go behind at home to Slovenia… for less than a minute. After Jordan Henderson put an own goal behind Joe Hart in the 57th minute, Wayne Rooney hit the turf to earn a PK just 15 seconds after the restart. Danny Welbeck netted 7 minutes later to give England its first lead, and the Three Lions are six points atop the group barring a Lithuanian upset of Switzerland later.

Welbeck later added a second off a neat 1-2 with Raheem Sterling as England found cruise control. The match was Rooney’s 100th cap.

Andriy Yarmolenko had scored just once for his country this season, against the United States in March, but netted thrice in 23 minutes for Ukraine. The Yellow-Blue are now tied atop the group with Slovakia, which plays later. 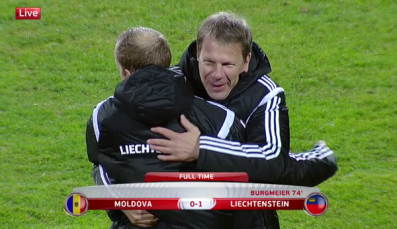 Franz Burgmeier scored the visitors first goal in five matches, as Liechtenstein snared its first win of this qualifying cycle despite being outshot 19-5.

The Estonian coach said his team would dominate and create many scoring chances, but barely held the edge in shots. Instead, the minnows kept their first clean sheet since 2004, which was the last time they picked up a point in any competition. Break up La Serenissima!

No David Alaba, no problem for the hosts, who got a 73rd minute goal from 1860 Munich striker Rubin Okotie in the 73rd minute to take a lead they wouldn’t relinquish.