The final day of Matchday 4 in qualifying for Euro 2016 went out with anything but a whimper.

Let’s spin through the results.

Netherlands 6-0 Latvia
The good news? Robin van Persie left little doubt as to whether their World Cup hangover had been cured, with the Manchester United striker scoring in the sixth minute to key three goals in each half. Arjen Robben added a brace, Klaas-Jan Huntelaar also scored two and Jeffrey Bruma also scored. The bad news? Daley Blind may have a serious injury.

Czech Republic 2-1 Iceland
Ragnar Sigurdsson started the visitors off with a bang in the ninth minute, but Pavel Kaderabek netted off a set piece right before halftime and a Jon Dadi Bodvarsson own goal lifted the hosts to all three points and the top spot in the group. Iceland is three points behind with 9, a trio of points ahead of the third place Dutch.

Turkey 3-1 Kazakhstan
Galatasaray striker Burak Yilmaz scored a brace as the hosts dominated play to the tune of an 18-6 advantage in shots attempted. With a pair of losses, the Turks are still two points back of the Netherlands for third place.

Cyprus 5-0 Andorra
Group B is an absolute mess, and the Cypriot team is reaping the benefits, currently in third place ab 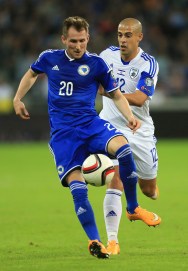 Israel 3-0 Bosnia and Herzegovina
The hosts led 2-0 when Toni Sunjic picked up a red card in the 47th minute to help Israel cruise to the win. No Edin Dzeko is going to be a problem for BNH, who lost the shots battle 14-13 and sunk to fifth out of six teams in Group B.

Belgium 0-0 Wales
All the credit to the Welsh here, who defended as a team to put themselves a point behind Israel for tops in the group. If qualifying ended today, Belgium’s Red Devils would miss Euro 2016. Wow.

Italy 1-1 Croatia
Both goals were scored in the first 15 minutes of the match, with Ivan Perisic evening things after Antonio Candreva put the hosts ahead. Croatia carried possession, shots and corners in the match but couldn’t get the three road points they wanted. The two sides are even atop the group on 10 points, with Croatia leading in goal differential by five points.

Azerbaijan 0-1 Norway
Borussia Monchengladbach holding mid Håvard Nordtveit headed home a cross in the 25th minute to give the visitors a close-range goal and a 1-0 lead they would not relinquish despite a stubborn effort from Berti Vogts’ crew.