A sloppy, mostly-inexperienced and out of sorts United States men’s national team made several momentous mistakes and only produced one goal in a 4-1 loss to Ireland on Tuesday in Dublin.

Hull City’s Robbie Brady scored a second-half brace against a United States defense that produced its worst showing in ages.

Anthony Pilkington and James McClean also scored for the Irish, while Mix Diskerud scored the Yanks only goal.

The USMNT out-possessed, out-attempted and out-cornered Ireland, but it mattered little considering how panicked they looked when Ireland got the ball.

[ USMNT: First half goal highlights | How worried should we be? ]

Brady put Ireland ahead in the 55th minute, when Fabian Johnson gave the ball away and David McGoldrick played set-up man for the second time to make it 2-1.

And James McClean of Wigan Athletic’s 82nd minute shot deflected off Geoff Cameron and past Bill Hamid to make it 3-1 late. 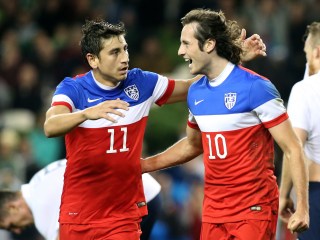 The breakthroughs came after the States played a sloppy first half that was saved by a Mix Diskerud goal (Video of both goals and a recap here).

Diskerud pressured Ireland into a giveaway before combining with Jozy Altidore and Chris Wondolowski to produce the equalizer after McGoldrick played Anthony Pilkington for the opening goal.

The first half was easier than Friday at Craven Cottage.

#USMNT: Successful passes vs Colombia and Ireland (1st half). pic.twitter.com/GlLLkKhnef

Plenty of Yanks fought the ball in the second half, but there were some bright spots when pushing forward, as Ale Bedoya and Fabian Johnson were a good combination.

Many USMNT players struggled, including Timmy Chandler in defense and Alfredo Morales. The young 2.Bundesliga midfielder looked out of his depth for much of the contest.

Shay Given denied Bobby Wood in the 67th minute, as the American forward looked to have Given beaten 1v1 only to have the keeper’s foot intervene to deflect the shot just wide. 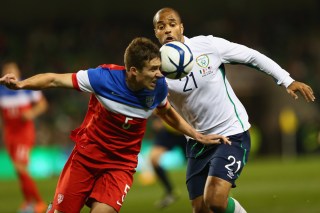 A 71st minute free kick provided a chance that Bedoya slipped to Garza, but his cross was cleared away.

Shane Long torched an otherwise-strong Greg Garza on the left before hitting the right post in the 81st minute, but moments later Ireland found its third goal through McClean.  And Brady added a goal off a freekick in the 88th minute to finish his brace.

The States are off for the rest of the year, with a January camp that normally features domestic players up next on the docket.