The United States 4-1 loss to Ireland wasn’t close to the only news in American soccer, as three MLS teams made statements about their short-term futures on Tuesday.

In the case of Columbus and Chicago, we’re talking about declined and picked-up contract options, while Philadelphia admitted one of their best young players could be on the move in order to bring in Maurice Edu full-time from Stoke City.

Union coach Jim Curtin said the club is optimistic about continuing to pair Maurice Edu with Carlos Valdes at center back, and that he recognizes that Philadelphia’s immediate future will likely be without franchise stalwart Amobi Okugo. They’ll offer the underrated back a new deal, but expect him in Europe.

“I’ve talked to him for several years that when you’re young is the time to try something like that,” Curtin said. “We’re pretty confident he’s going to take that option.”

Okugo, 23, is a gifted player who has represented the US at several levels but has yet to get a look under Klinsmann. His style would fit neatly in several European leagues, and he also is eligible to represent Nigeria.

[ USMNT: A right to be worried after Ireland blowout? ] 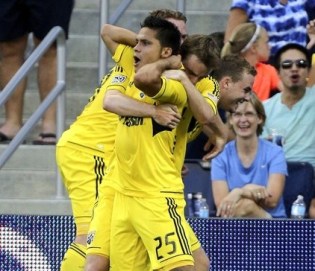 Now to Columbus, where a Costa Rican international isn’t coming back to Gregg Berhalter’s team. The Crew have decided to decline the option of 31-year-old forward Jairo Arrieta. Berhalter said the signing of Kei Kamara and the emergence of big Aaron Schoenfeld made Arrieta expendable.

Many of the players whose options were picked up are not surprising, like Wil Trapp, Tony Tchani, Waylon Francis, Steve Clark and Federico Higuain. Check the full list of Crew option action here.

Now to Chicago, where Frank Yallop and the Fire have resigned Patrick Nyaro while exercising the options of six players including standout forward Quincy Amarikwa. They said goodbye to options on 11 players, notably Gonzalo Segares, Patrick Ianni, Bakary Soumare and Robert Earnshaw.

The Fire also revealed that Homegrown midfielder Victor Pineda is out of contract and that loan deals for US youth international Benji Joya and Tottenham loanee Grant Ward have expired.

It’s going to be a very different looking Fire in 2015.