Are we overreacting, under-reacting or just plain reacting to the United States woeful showing against Ireland in a 4-1 friendly loss Tuesday in Dublin?

Frankly, it’s hard to judge with the wound so fresh. For every stated, “Ireland was playing their second-best players” blast is another, “Yeah, but wasn’t Jurgen Klinsmann doing the same?”

For every, “What woeful defending!” from American critics there’s also a “How about that Irish performance?” from the home fans.

So let’s play a bit of “Mythbusters” here.

Myth or fact: The USMNT’s best was trampled underfoot by Ireland’s second string

Let’s start with the Irish: this was certainly their second-choice group. James McCarthy and Seamus Coleman of Everton were missing, leaders John O’Shea and Darron Gibson weren’t around, Robbie Keane headed back to MLS and Jonathan Walters wasn’t playing either.

Those are clear-cut World Cup difference makers, for better or worse, and that list does not include missing would-be players Joe Gyau (injured) and Lee Nguyen (MLS) duty. Michael Orozco was left home and DaMarcus Beasley was sent home.

So this one’s a myth.

Myth or fact: The US lost the game far more than Ireland won it. 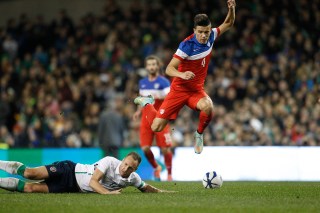 Robbie Brady’s free kick was spellbinding, and David McGoldrick was making plays like an Irish version of Mesut Ozil. Shay Given — Guzan’s Aston Villa backup — was pushing would-be goals aside like his Newcastle United prime. And when they took the lead, the Irish packed it in and countered like Energizer bunnies, never losing their gusto.

But let’s face facts, here: This USMNT side was frazzled from the get-go, and when things got worse, they looked downright lost. Alfredo Morales looked out of his depth, Matt Besler appeared flat-out exhausted, and neither Timmy Chandler nor Fabian Johnson showed a heck of a lot of their defensive acumen in this contest. Even normally reliable Kyle Beckerman was making poor choices and errant passes.

The United States gave this game away. Full credit to Ireland for finishing their chances, but more truth than rumor, this one.

Taken in a vacuum, you can get over the 4-1 loss to Ireland as a one-off. You can write-off the 2-1 loss to Colombia by pointing out that Los Cafeteros are beating most anyone in their path not named Brazil.

But what about the final frame foul-ups against Honduras and Ecuador? Or the “Saved By Rimando” win that was the second half in Prague? The States have not looked great. Even taking into account tinkering and experimentation with the lineup, the US has not lived up to its billing from the World Cup.

Ah, there’s the rub. The World Cup. This is where the worrying rubber meets the panic road. If you’re still one of those freaking out about what Landon Donovan would’ve done if he were in Brazil, and fit in with the “I’m going to hate everything that comes out Jurgen Klinsmann’s mouth” crowd, then you should be freaking out.

And, to be fair, even if you are like the many who haven’t made a decision on whether Jurgen Klinsmann is the answer, the last few months haven’t done much to reassure you. So, whether you’re a Klinsmann believer or skeptic, your worry is real.

That’s a fact, and a troubling one with months before we get any further looks at the Stars and Stripes.