A Kieran Gibbs own goal off a Antonio Valencia shot lifted Manchester United to a road lead at the Emirates, and Angel Di Maria and Wayne Rooney combined to jam the dagger through Arsenal’s heart in a 2-1 win that cost the Gunners the services of Jack Wilshere.

Olivier Giroud scored deep into stoppage time for Arsenal, but it wasn’t enough.

The chances were there all day for Arsenal, as the Gunners tested a three-man back unit that included Chris Smalling, Tyler Blackett and Paddy McNair. Injured goalkeeper David De Gea was called upon to make some easy-enough saves.

Then he was really tested by  a wide-open break from Wilshere, who took three touches before hitting it right into a sliding De Gea’s stomach.

Ashley Young had to come on for Luke Shaw, who was injured in the 15th minute to multiple United’s injury woes.

Wilshere was incredibly lucky not to be sent off for going at Marouane Fellaine with his head around 28 minutes in, making contact more than once right in front of referee Mike Dean.

Wilshere should be off after putting his head into Fellaini, but Dean does nothing http://t.co/PJOu17y105 pic.twitter.com/NziA7iiQoa 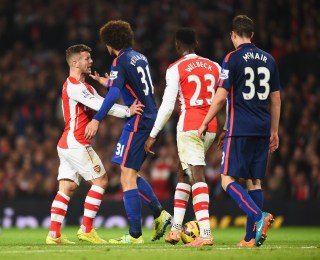 Di Maria found a chance for United in the 35th minute, cutting in from the right wing to lash a shot just wide of a diving Wojciech Szczesny… and the goal.

Wilshere went off the field for another reason after being clipped by a McNair slide tackle in the 52nd minute. He walked off on his own power

Soon after, calamity struck when Valencia’s shot was basically flicked into Gibbs own goal to make it 1-0 to the visitors. Szczesny was hurt on the play, and was replaced by Damian Martinez.

Cazorla got a great chance headed down to him by Welbeck in the 68th, but De Gea was there.

Arsenal kept pressing, but Rooney caught the end of a Di Maria long ball in the 85th minute and popped the ball over a helpless Martinez to seal the three points.

Di Maria had a 50-yard breakaway in injury time, but chipped the ball wide of the goal.

Would it come back to cost them? Maybe, as substitute Giroud beat De Gea with a left-footed laser five minutes into stoppage.