Newcastle had a series of chances pushed out for corners in the 18th minute, including a great save by Robert Green on a bullet from Ryan Taylor.

Taylor almost scored again after Ayoze Perez turned the QPR box inside out before slipping to Remy Cabella, who spotted Taylor at the spot. But the midfielder, making his first start in nearly three years after knee trouble, was denied by Green.

And then, heartbreak. Taylor crumpled to a heap just outside his own 18. He was tended to for several minutes before walking off, in tears but on his own power. His return to the NUFC Starting XI lasted all of 34 minutes. 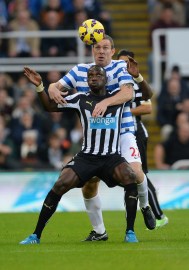 Daryl Janmaat had the game’s next prime chance when Cabella created some space, but his header was open shot was again saved by Green.

The second half again opened up in Newcastle’s favor, with a long spell of play in QPR’s end (and in their 18). Charlie Austin had a chance for the R’s at the other end, but Tim Krul scooped up a low shot.

The introduction of Niko Krancjar for an injured Sandro dramatically shifted QPR’s fortunes, as they took hold of the chances in the middle of the second half. Joey Barton put in a strong shift for the R’s, but they couldn’t find an in-form Austin often enough.

But Newcastle came back to finally beat Green when Sammy Ameobi touched a neat pass to Sissoko, who turned and fired home.