Catch up on all of Sunday’s action from Spain and Italy’s top flights, La Liga and Serie A.

Valencia‘s bid to break into La Liga’s top three took a hit on Sunday when Los Che fell to bottom-half side Levante. The visitors looked poised to rescue a point after Daniel Parejo pulled Valenica level after 73 minutes, but it took just one minute for Levante’s Morales to hit back and put Levante back in front for good. On-loan Manchester City forward Alvaro Negredo provided the assist on Parejo’s goal.

A pair of first-half goals — provided by Mario and Gerard Moreno — was enough to push Villarreal four points clear of the bottom half of the table and set Marcelino Garcia Toral’s men’s sights on a top-third spot. 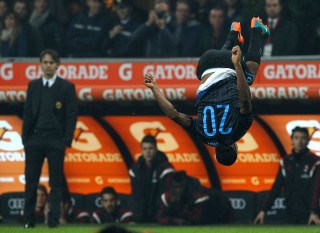 Roberto Mancini made his Internazionale re-debut in Sunday’s hotly contested Milan derby. Mancini’s men went a goal after 23 minutes, thanks to Jeremy Menez’s extremely clever first-time finish from 12 yards out.

Menez’s brilliant opener went for naught, though, when Joel Obi pulled the Nerazzurri back to level terms with 30 minutes to play. Stephan El Shaarawy had a golden opportunity to put the Rossoneri back in front in the 75th minute, but his powerful 1-on-1 effort instead found Samir Handanovic‘s crossbar and shot straight into the sky.

With the draw, Inter (9th) remain a point behind their Milan neighbors (7th) in Serie A.

Napoli found themselves in dreamland after 30 minutes, up 2-0 and seemingly set to coast to their sixth league victory in nine games. Gonzalo Higuain netted the game’s first in the 11th minute and Gokhan Inler doubled the lead on the half-hour mark.

Then came a 10-minute span that saw the 3rd-placed side ship a pair of goals Cagliari’s way, tying the game up just two minutes into the second half. Jonathan de Guzman put the Azzurri back on top in the 62nd minute, but the lead was short-lived as Diego Farias netted his second of the game just five minutes later. An opportunity to pull within four points of second-place Roma missed. Meanwhile, the away point was enough to move Cagliari two points clear of the final relegation place.

Elsewhere in Serie A: