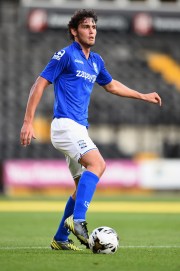 Young US defender Will Packwood has found playing time hard to come by under new Birmingham City boss Gary Rowett, and is leaving the Championship side on loan.

The 6-foot-3 Packwood, 21, made strides in the Brum lineup last season, making 13 appearances on top of another 8 while on loan to League Two side Bristol Rovers.

But he’s off to League One’s Colchester United for a month after not appearing since 40-year-old Rowett took over in late October.

Packwood is headed from one relegation scrap to the next, with Birmingham City just above the Championship drop zone and Colchester in the relegation zone of League One.

Packwood is a promising defender who can be a big part of the US U-23 picture and onward. With the USMNT defensive woes, he’s a player to monitor closely.

Brek Shea remains on loan at Birmingham City from Stoke City, while Jonathan Spector is injured but a regular for Brum.