Chelsea didn’t just go into Veltins Arena and beat their old manager on Tuesday; The UEFA Champions League club made yet another dominant statement of intent for the rest of the tournament.

The Blues aren’t just a strong English side this season under Jose Mourinho, they are a force to be reckoned with after a simple, effective and comprehensive 5-0 win over Roberto Di Matteo and Schalke in Gelsenkirchen.

John Terry, Willian and a Schalke own goal paced the Blues to a 3-0 halftime lead, and Didier Drogba and Ramires netted in the final 45 minutes as Chelsea clinched first place in Group G. 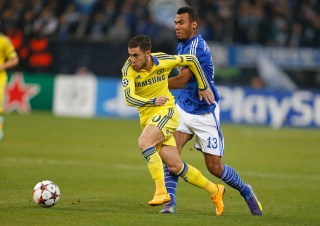 Terry didn’t waste time in asserting that Chelsea were the team to beat, heading home a cross from Cesc Fabregas, who is in nearly-imitable form. It was 1-0 inside of two minutes.

Willian made it 2-0 in the 29th minute, as goalkeeper Ralf Fahrmann reacted poorly to his low shot. The goal may have been soft, but the buildup was not. Chelsea was thriving.

And the Schalke crowd was booing by the time Chelsea made it 3-0 just before halftime, with a picture-perfect headed… own goal.

Chelsea kept asking the proverbial questions in the second half, with Drogba tapping home a 2v0 chance on a pass from Willian in the 76th minute. Drogba turned provider less than a minute after the restart for a 5-0 lead.