The weekend ahead in the Premier League would normally be one that predicted separation between league powers and the rest of the table, but this isn’t your ordinary season in England.

Arsenal and Liverpool look to bring some semblance of normalcy to their seasons against “lesser” competition, but our story lines begin with a surprising battle for second place on the table.

1) Can Manchester City manage three points at St. Mary’s? This would’ve been a laughing matter after Liverpool raided Southampton’s stable this summer, but the Saints have thrived with replacements Dusan Tadic and Graziano Pelle. Now Southampton is on the front foot, at home and two points ahead of No. 3 City. The Saints haven’t lost in five matches, and a win — perhaps just a point — against City will solidify their status as European contenders.

2) Can Chelsea keep up its “better than the Invincibles” pace? Jose Mourinho’s boys are rolling through England and the rest of Europe, trouncing Maribor midweek with a comprehensive victory. In the Premier League, their record through 12 games is better than even the Arsenal side that went unbeaten with Thierry Henry in the early part of this century. Now they’ll head to the Stadium of Light to face lower-table Sunderland. Shoudn’t be a problem, right? 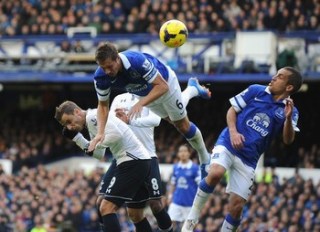 3) Who will reset their European aims: Everton or Tottenham? Spurs welcome in the Toffees with both clubs on a disappointing 17 points through 12 matches. Tottenham boss Mauricio Pochettino is hoping to get his home form in order after consecutive losses at White Hart Lane. Meanwhile, Everton faces its toughest Premier League test since the start of their five-match unbeaten streak.

4) The battle for fifth place (or better) in London. Newcastle United is on the best form in the Premier League after starting the season miserably, and the Magpies are one point ahead of former manager Sam Allardyce’s strike force in West Ham. The Irons have two draws and a loss since their impressive upset of Manchester City. Which team will keep their Top Four claims looking legit for at least another week?

5) The points that could decide a relegation spot come May. How much longer can Harry Redknapp keep his job based on “game efforts”? Queens Park Rangers welcome in Leicester City for a Saturday battle that could catapult one of them out of the Premier League drop zone. On the other side, the Foxes’ early season surprises are a thing of the past. With QPR in last with 8 points and Leicester just two points ahead of them, could these three points be ones the other side will be ruing at the end of the season.