The goals were flowing in like pilsner in Germany this weekend, with all but one Bundesliga match holding a victor that scored three or more goals.

With some big names still to play on Sunday, Bayern Munich managed a slim win to keep the pressure on the rest of field.

Hertha Berlin 0-1 Bayern Munich
USMNT center back John Anthony Brooks (pictured dueling with Dante, right) was part of a unit that was nearly flawless, but almost won’t cut it against a power like Bayern Munich. Arjen Robben netted in the game’s first half-hour, which was all the reigning champions needed to pick up three points. If Borussia Monchengladbach knocks off Wolfsburg on Sunday, Bayern will have a 10-point lead on the table… in November.

Hoffenheim 4-3 Hannover 96
Easily the match of the day, Hoffenheim built 2-0 and 4-2 leads before holding on to leapfrog the visitors in the standings. Pirmin Schwegler and Kevin Volland scored in the first 37 minutes, but Lars Stindl netted his first of two before halftime to make it 2-1 at the break. Joselu’s 52nd minute goal made it 2-2, but started a rush of three goals in 11 minutes before Stindl netted again late to make it interesting for the final 8 minutes plus stoppage.

Augsburg 3-1 Hamburger SV
Rafael van der Vaart looked to spring a surprise upset with a goal very halftime, but in-form Augsburg scored thrice in the second half to move fourth in the Bundesliga. USMNT attacker Julian Green entered as a substitute for the final 15 minutes and picked up a yellow card for the visitors. 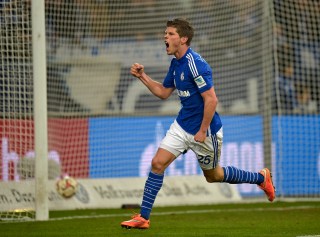 Bayer Leverkusen 5-1 FC Koln — A pair of goals for the mighty Karim Bellarabi.