Jose Mourinho has chosen the bus parking tactic in the past, but the Chelsea manager couldn’t have been pleased at how well Sunderland implemented it against his Blues at the Stadium of Light on Saturday.

Sunderland held firm in the back and Costel Pantilimon made a number of saves when his club faltered, as the Black Cats drew Chelsea 0-0.

Chelsea stays atop the league but opens up a chance for either Southampton or Manchester City to gain ground on Sunday. Sunderland moves up to 13th, with 14 points.

Sunderland opened the game with spunk, daring to take chances with some high pressure, but Chelsea had the first few bits of danger.

Willian’s early shot was barely flicked aside by Costel Pantilimon, and the Blues kept working toward the Black Cats goal. The keeper was again called upon in the 31st minute, and successfully turned aside a hard shot from Branislav Ivanovic. 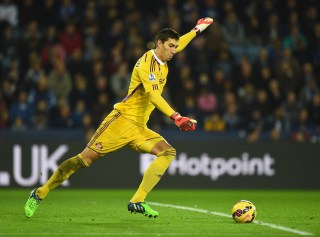 Santiago Vergini gave the Black Cats a shot at a 34th minute goal, but his half-volley sailed just over the bar, much to the relief of Thibaut Courtois.

Diego Costa should’ve seen red in the 44th minute when he twice kicked out wildly from a prone position, but it was just a warning from referee Kevin Friend.

The second half again began with chances for Chelsea, as Gary Cahill rose to head a powerful ball right at Pantilimon.

Costa could’ve seen red a second time, as he swung his back arm into Wes Brown’s face in a 50-5o situation. Friend issued a yellow.

Poyet brought on USMNT striker Jozy Altidore for a rare appearance, and the Black Cats were able to put a little more pressure on Chelsea once the Yank subbed in along with Jordi Gomez. But mostly it was more bus parking from the Black Cats.

The 76th minute injections of Loic Remy and Didier Drogba spurred the Blues into some chances, with the Ivorian in particular helping things ahead.

Altidore gave the visitors a scare in the 82nd minute with a ruckus near the six, but Chelsea was able to clear the ball away.

Adam Johnson also had a pair of late chances for the hosts, but could not convert either into a winner.