Burnley scored early and that held on for their lives as Newcastle United split the points at Turf Moor in a 1-1 match on Tuesday.

George Boyd scored in the 34th minute, but Papiss Cisse equalized after halftime.

The Magpies are the last of four teams on 20 points, in 10th place, while Burnley is taking its first breaths out of the drop zone with 12 points. 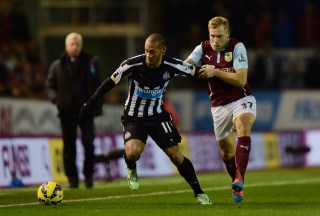 Danny Ings stopped on a dime in the ninth minute to test Rob Elliot, but Newcastle’s No. 2 keeper punched the ball away with this left hand.

The Magpies looked suspect at the back with Mike Williamson starting and Paul Dummett moving inside the support him, and sure enough Boyd struck first when Ings chested the ball down to him from just more than 20 yards away. A good goal.

Newcastle made a pair of inspired substitutions to start the second half, with Williamson coming out for Steven Taylor and Remy Cabella moving in for an ineffective Ayoze Perez.

Within minutes, Cabella had a point blank chance to score, but his miss was forgotten within 30 seconds, as Daryl Janmaat’s cross was flicked only slightly by Yoan Gouffan to Cisse, struck the ball at the same time as his mark. It was 1-1.

The second half featured a heavy dose of the Magpies, who just couldn’t seem to find that needed second goal.

Newcastle begins a murderer’s row of fixtures now, with three perennial powers and the Tyne-Wear derby in its next four matches.