Liverpool responded with vigor after going down early to Leicester City before cruising to a 3-1 win over the 10-man Foxes on Tuesday.

Jordan Henderson, Steven Gerrard and Adam Lallana scored for the Reds, while Leonardo Ulloa put a ball off the post and off Simon Mignolet for an “own goal” by the keeper.

The win launches Liverpool level with three other teams for 7th in the Premier League, while Leicester is dead last on 10 points.

Gerrard was in his wheelhouse with a 7th minute free kick from just outside the right side of the box, but his curling cross was headed down and wide by Martin Skrtel. 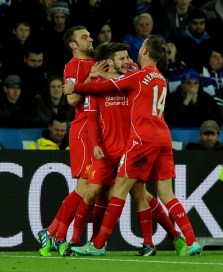 But Leicester scored first after a spell in which Liverpool played with fire thrice in one minute. First Simon Mignolet made a horrific clear that Esteban Cambiasso inexplicably failed to shoot into a wide open goal.

Then Skrtel cleared a Leonardo Ulloa shot off the line before the Argentine collected the rebound with his back to goal, turning around a put a ball off the post that Mignolet’s back and went into the goal.

Gerrard got another free kick in the 26th minute from a bit further out from goal, but hit it into the wall. The rebound was played back into Lallana, who finished past Kaspar Schmeichel.

Yet, believe it or not, Gerrard would score from the run of play, stepping into a loose ball just beyond the penalty spot and sending a no-doubter past Schmeichel to make it 2-1 Liverpool in the 54th minute.

Wes Morgan was sent off with a half-hour to play, all but salting away the match for Liverpool it would seem. After a defensive lapse as the last man back, he wrapped up his mark and took him to the turf.

Gerrard collided with Schmeichel on a breakway and was baffled at not securing a penalty for the Reds. It would’ve been easy to give, but the referee deemed the contact to be fair.

Unfair contact came on a yellow card to Schlupp, who went dangerously head-to-head with Jordan Henderson for a 50/50 ball. Henderson left the field with trainers, only to return and score an 83rd minute insurance goal.