The translated headline roughly reads, “Mix sold the house and went on holiday to the USA.”

It’s big news in Norway that USMNT midfielder, last of Rosenborg, sold his gigantic Norwegian villa for $1.5 million. That’s because the out-of-contract midfielder is a fan favorite in Trondheim, and rumors of his moves to MLS or elsewhere have been running rampant for months.

That said, it’s not doom and gloom for Rosenborg fans. Diskerud said the house was simply too big for him and he has a penthouse waiting for him if he returns to the club.

And, to be fair, the house is pretty big (Ah, the tribulations of professional footballers. So many rooms to furnish): 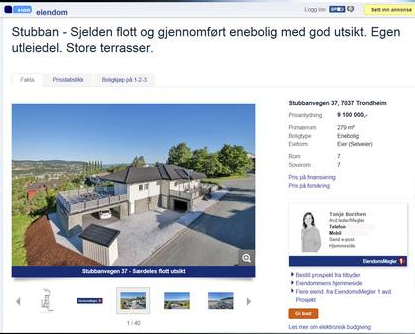 The real takeaway is that Rosenborg’s general manager says contract talks are just starting with Diskerud, and that they haven’t ruled him out as coming back to Norway.

The recently-turned 24-year-old midfielder is in demand. On top of interest from MLS and Qatar, names tossed about by MLSSoccer.com include, “Belgium’s Jupiler League and the Dutch Eredvisie, and he has also been linked to the likes of Celtic and Werder Bremen in various European papers over the course of 2014.”

So where is he going? Honestly, it’d be nice to see him playing on a team that plays on the traditional international calendar. Other than that, many clubs and leagues can be a step up from the Tippeligaen. Like Bob Bradley at Stabaek, if a better offer presents itself, go. Otherwise, stick around at a place that has yet to hurt your development.