Matt Reis has been involved in every single moment of the New England Revolution’s MLS Cup heartbreak, so its as fitting as possible that he’ll be on the opposition’s sideline come Sunday.

Reis was in the Galaxy goal when L.A. beat the Revolution in the 2002 MLS Cup, then switched coasts for New England’s three-straight MLS Cup final losses from 2005-2007. He then took a job with the Galaxy as a goalkeeper coach, and see his former mates as a championship foil on Sunday.

Along the way, he began to mentor a young kid fresh off his time at the University at Buffalo.

That kid, Bobby Shuttleworth, is 27 now, and has met the expectations of taking over for a franchise and city hero by helping foil opposition attacks all the way to the MLS Cup final.

“I like the fact that Matt’s going to be involved in the game,” Shuttleworth told Pro Soccer Talk. “Matt had a lot to do with this team that we have now. He was huge for us since I’ve been in on the team. He’s been one of the most integral parts of the Revolution. 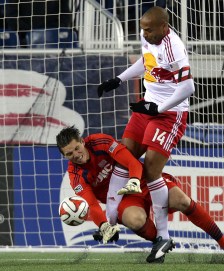 “Now he’s with a different club but I think there’s still part of him that feels like he’s a little bit part of this team and I think he should. He has a lot to do with a lot of people’s careers that are on this team.”

For Shuttleworth, his ride to the starting job has been anything but smooth sailing. After waiting four years for regular playing time, he got the chance to slide when an injury to Reis put the club in peril last season. Shuttleworth responded by setting the club record for minutes without conceding a goal, but still had to win the battle for the starter’s gig when Reis retired last winter.

It’s part and parcel for Shuttleworth.

“Every part of my career, I’ve had opportunities and I’ve had people help me, but I’ve really clawed and scratched for every opportunity I’ve been given,” he said. “I feel like I’ve earned all those opportunities with hard work. There have definitely been people along the way who have helped me and I’m so grateful to those people, whether it’s the Revolution or Stevie Nicol or Jay (Heaps) or Remy (Roy) or Matt Reis, a lot of people have helped me to get where I am.

“Every part of my career has led up to this. I’ve taken lots of little steps to take a couple big steps. Every year that I’ve grown as a player and a person, it wouldn’t have been that case unless there were bumps in the road.”

Shuttleworth played the eighth-most minutes in the league this season, and was in the top half of the league in most goalkeeping statistics. He stopped 2 of 4 penalty attempts and recorded eight clean sheets, tied for fifth in MLS.

He’s yet to keep a clean sheet in the wild and wooly playoffs, as New England beat Columbus 7-3 on aggregate before tipping New York 4-3, but with Shuttleworth it’s the sublime reflex saves that are creating a name for him. And of MLS playoff goalkeepers, only Bill Hamid is younger. But his age betrays his journey.

“It was a grind for a 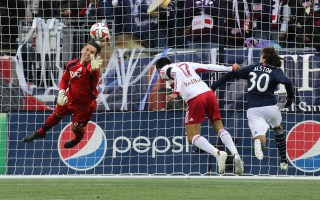 lot of years and it was a lot of wondering if I was going to be able to do this long-term or where the path was going to take me,” he said. “I’m grateful to the Revolution for allowing me to develop, and all those people that’ve helped me in this club along the way. To say that it was an easy road, wouldn’t be honest. It was definitely a grind, but I think that’s made me into a better player and a better person.”

Top-notch goalkeeping is going to be necessary for the Revs to top L.A. on Sunday, with the veteran-savvy of Landon Donovan and Robbie Keane oozing through the Galaxy attack alongside fierce young talent like Gyasi Zardes. And Shuttleworth’s wary of the challenge.

“We’re a group of working players who know what we have,” he said. “They have a great team. They have unbelievable attacking pieces. They’re a complete team, and it’s going to be a very very difficult for us. We’re excited about the opportunity and we’re relishing being able to go in there and hopefully win the club’s first Cup.”