Borussia Dortmund used home field as an advantage to pull itself out of the Bundesliga basement, while Bayern Munich continued its winning ways and several teams kept Germany’s top-flight a high-scoring league on Friday and Saturday.

USMNT fans will have to wait until Sunday to see if Julian Green and/or Timmy Chandler can star, though two other American internationals were involved in our first showdown of the the wrap.

Let’s get to the matches: 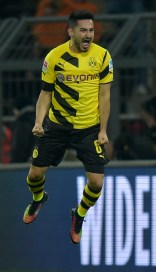 ussia Dortmund 1-0 Hoffenheim
Ilkay Gundogan’s 17th minute goal lifted BVB off the bottom of the Bundesliga, as Dortmund leapt five places up the table with Friday’s much-needed home win against Hoffenheim. It was Gundogan’s first goal of the season in just his fifth appearance.

Borussia Monchengladbach 3-2 Hertha Berlin
A thriller at Borussia Park saw two American internationals on opposite ends of the pitch. Fabian Johnson came on as an 86th minute sub for the hosts, who led 3-1 at that point on goals from Tony Jantschke, Raffael and Thorgan Hazard. John Anthony Brooks was on the field for 90 minutes, but that also means he was on for a trio of goals.