The title race is on.

In a game that will never be described as pretty, and perhaps not even as fair, Manchester City used a Yaya Toure penalty kick to get the better of Tim Howard and Everton at the Etihad Stadium on Saturday.

City now has 33 points, three less than Chelsea. The Blues fell to Newcastle 2-1 earlier in the day.

Everton sits in 11th place, far from its European ambitions.

Sergio Aguero left the match with an upper thigh injury after just 4 minutes.

Eliaquim Mangala should’ve seen red after flying feet first into the back of Samuel Eto’o, but City caught a break before getting an even bigger one when James Milner went down after suspect contact from Phil Jagielka in the box. 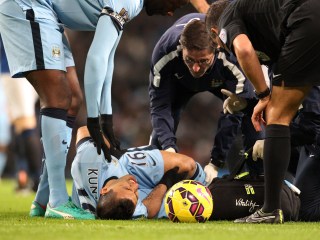 But Toure was dinged up just before halftime, limping off the field before coming back to play out the final few minutes of the half.

Milner turned provider for Pozo in the 49th minute, only to see an athletic, right-leg reflex save from Howard force a corner and keep the deficit one.

Everton began to get the run of play as the second half wore on, shrinking City’s advantage in possession but unable to find many shots on target. In the 82nd minute, the total shot attempts were a combined three between the teams for the game.