First things first, the soccer played in Sunday’s 2014 MLS Cup final was not a perfect advertisement of “the beautiful game.” Let’s remember, though, that cup finals rarely are, no matter what part of the world we’re talking about.

They’re almost always cagey affairs with tons of adrenaline and anxiety beforehand, both sides unwilling to be the ones who “lost” the game, and stretches of “good soccer” being few and far between.

The fine folks over at Backheel.com probably described Sunday’s final, and all cup finals for that matter, as well as can be done.

That said, here’s how the LA Galaxy won MLS Cup 2014, their third title in four years, willing their way past the New England Revolution in Sunday’s final.

“We own the left” – LA Galaxy — On the Revs’ left side of defense, you’ll find Chris Tierney and Jose Goncalves — two veteran defenders ranking among the top five or 10 at their respective position within MLS. On the right, there’s A.J. Soares and Andrew Farrell — a pair of young, promising, up-and-down performers opponents frequently target.

Here’s everything the Galaxy tried to during the first half on Sunday. And — shocker — which side did they target most frequently? 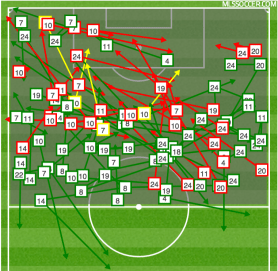 The number of attacking-half touches by left back Robbie Rogers (14) tells you everything you need to know about Bruce Arena‘s attacking gameplan. The game’s opening goal also came — albeit, secondarily — from targeting Farrell who was nowhere near up to the challenge of marking Gyasi Zardes one-on-one.

Sarvas locked in on Nguyen — I thought Juninho might draw the assignment of following MVP finalist and Revs attack catalyst Lee Nguyen all over the field, but it was Marcelo Sarvas, instead, which makes plenty of sense considering the two switch roles over and over through the course of 90 minutes with great situational awareness.

In the first half particularly, Sarvas was all over Nguyen, allowing him fewer than 20 touches in the Revs’ attacking half, including a whopping zero inside 25 yards from goal. In the rare instance found the ball at his feet, he had little time — and even fewer options — to pick out a forward pass of carry the ball forward, something he did so devastatingly well in the regular season.

Second-half adjustments — Donovan moves more centrally and Zardes goes wide. This one didn’t seem to make a ton of sense from Arena. For starters, both players are far bigger contributors in the positions in which the started the game. Beyond that, it lets Farrell off the hook by killing the overlapping moves of Donovan and Rogers.

Patrick Mullins took Charlie Davies‘ place after 72 minutes and immediately had an impact on the game. It took him seven minutes to set up the Revs’ equalizer, but the biggest difference between the two forwards’ shifts was evident in sheer work rate. Mullins made the left-channel run that Davies had failed to all game long, and in doing so set up an overlapping Chris Tierney for a goal. Very simple stuff, really.

The brightest star steps up in the biggest moment — As I said after Robbie Keane scored the game-winning goal, you’d expect nothing less of the 2014 MLS MVP. He’d struggled up until that point, selfishly trying to create shots of his own when he had better options elsewhere, But when he got behind the backline of the Revs, there was no doubt in anyone’s mind he would find the back of the net.

In the end, experience and the been there, done that factor was just enough to nudge the Galaxy over the line.

This is the #MLSCup debut for all 11 of the #NERevs starters.