In 2009, scientists couldn’t figure out why star Cassiopeia A, which had gone supernova just 330 years ago, was emitting strange x-rays.

With the help of new data, they finally arrived at the conclusion that the exploding star had actually birthed a baby neutron star, and we were witnessing a brilliant moment in space history.

“It turns out that Cas A may be a gift from the Universe because we would have to catch a very young neutron star at just the right point in time,” said Ohio University scientist Madappa Prakash back in 2009.

America just observed the career of its very own Cassiopeia A come to an end, calling time on one of the greatest gifts to the US soccer Universe, and we’re only just realizing what we’ve witnessed. Of course, he departed a champion, defeating the New England Revolution 2-1 in yesterday’s MLS Cup Final, because we wouldn’t want it any other way.

But there is so much more from his career than trophies.

“I absolutely want to work with kids,” Donovan said when announcing his retirement. “I spoke to (Chris) Klein extensively about working with the Academy. That for me would be a really good way to come full circle. I fully expect that that will happen at some point.”  That circle has yet to completely connect, but it’s well on its way.

“Landon Donovan’s ability to run away from defenders, run away from players, and be fit for 90-plus minutes and to play thousands of games in his career and stay healthy,” former USMNT player Taylor Twellman remarked, “I don’t know if he gets enough credit for that.”

Landon Donovan departed the playing field for the last time. He will no longer grace stadiums in the United States and beyond. Goodbye San Jose Earthquakes. Goodbye to Everton. Goodbye to the LA Galaxy. And most importantly, goodbye to the US National team. But it wasn’t always this nostalgic. He began with vigor, but with naivety as well.

“I remember the first time meeting Landon Donovan, with his blond hair and being a little bit of a punk,” Twellman said. “And then I remember my first training with him, and he blew everyone out of the water.”

Donovan’s career was the prototypical bell curve. That “punk” kid rubbed many the wrong way in the early going. Bruce Arena discovered Landon while managing DC United, and even he was a bit put off. I asked the 63-year-old to expand on his long-held belief that his first impression of Landon was not a positive one.

“He shot his mouth off, he was a wise guy, but he certainly backed it up with his play on the field,” Arena said. “That was my first impression of him, but not my last impression of him. He was a pretty typical American teenager at that time.”

And that’s what makes his story so magnetizing. Many young people – new, impressionable sports fans watching soccer for the first time – could identify with this kid, with this “punk.” And the American public wanted him to succeed, not just because he is American, but because we wanted ourselves to succeed vicariously through him, to transform with him.

Make no mistake, there will never be another Landon Donovan. One could rattle off all the achievements and numbers he holds that have been hammered into our brains, but records are meant to be broken, and as long as the national team continues to produce and Major League Soccer remains intact, they will eventually be broken.

Records may fall, but there will never be another trailblazer.

“There aren’t that many players that are going to be able to give us what Landon gave us over a long period of time,” Arena said.

But that’s precisely the point.

Ability is given but intangibles are not

Of all Landon Donovan’s great accomplishments for the sport in this country, his greatest is without a doubt the most ironic. For a man who prided himself greatly for his accomplishments on the field, he has left the sport in this country poised to slingshot its next big star – his replacement in the spotlight – to even greater heights than he could achieve. Donovan laid the groundwork for what soccer in the United States can become by priming the nation’s viewers to envision what it can potentially achieve. And a lot of it has to do with his maturation.

“Landon’s done a lot of things off the field as an elder statesman not only with younger players but with other players around the league,” said Arena. “He set the tone for the American player in the league, and hopefully as pay scales improve, he will continue to be a quiet voice behind the teams in collective bargaining on the player’s side. So there’s a lot of things that he’s done as he’s matured as a person and player, and it’s been an important part of growing the sport and growing his legend as well.”

Just look back to how Landon’s miss on the 2014 World Cup resonated through the mainstream American public. It was a huge deal – and rightly so – that US Soccer’s most marketable star was absent from the selection.

Soccer in the United States is by no means a fledgling enterprise. The sport has been smoldering in the shadows for decades, awaiting a moment of true eruption. The catalyst has been provided, and now the stars of tomorrow are tasked with sparking the blast.

Along those lines, an individual can be a pioneer without being the first. Christopher Columbus was by no means the first European explorer to discover the New World – that would be Leif Erikssen, nearly 500 years prior to Columbus’s voyages. But the Italian was the most successful at popularizing the influx of exploration and growth to the region that would follow.

“Growing up and seeing where he’s at today, I think the most important thing is to know that anything is possible,” said young US talent Greg Garza.

Thing is, Garza’s not exactly right.

When it comes to results in the World Cup – the only measuring stick that truly matters among the populous – the US national team actually hasn’t improved all that much since Landon took the field.

Before Donovan’s first World Cup in 2002, the US had made it out of the group stage once in the previous three years. In the next three with Landon, the US made it out twice. But the country never got past the quarterfinals, and were eliminated in the first group stage match once with Landon and once without.

But perception is reality, and he was able to achieve what no one else could in this country: open the floodgates of mass appeal. To put it simply, Donovan put butts in seats. More importantly, he put butts on couches. In front of televisions.

“When you look at everything that goes into growing a league, it’s incredible how far things have come [in Major League Soccer],” said former MLS and USMNT manager Bob Bradley. “That includes better TV packages, better visibility, and Landon certainly deserves a big mention because he was always committed to Major League Soccer.”

And it wasn’t just in the United States. Landon went abroad to play with Everton hoping to exorcise some early European demons, and he was an instant hit with Toffee fans despite playing just 22 matches for the Blue of Goodison Park. And it all started with his play on the field.

“He arrived at the perfect time in the 2010 season. With Baines and Pienaar, the team papercut opponents down the left flank,” said Roger Bennett, Men in Blazers co-host and die-hard Everton supporter. “Landon gave them a right side threat for the first time and forced opponents to worry about both sides of the field. His impact was immediate and evident for all to see. Landon was the perfect fit tactically for them. He grabbed the opportunity with a tremendous zeal and the fans responded in kind.

“The two cameo loan spells were fleeting but their intensity negated the charge that Landon could not hack it at the elite level. To this day, Everton fans harbor fond memories of Landon.  They talk about him with full-throated praise in a way I believe far more Americans will with the healing perspective of time.”

Donovan’s time in England was nice, but it didn’t define him. As Bradley said, he was committed to MLS.


Finally, Donovan has been dedicated to ushering in new talent in any way he can. He’s been doing it all along, and the recipients of his guidance are taking notice.

“My first big call-up was against Holland in Amsterdam,” said Alejandro Bedoya of his first experience with Landon Donovan, “Before the game I remember him coming over to me and putting his hand over my shoulder and telling me ‘hey you’re here for a reason, go out there, prove yourself, just play your game, and most important just have fun and enjoy it. It’s going to be a great game.’ I’ll always remember that, it spoke volumes about him.”

“For me when I first started on the national team,” Jozy Altidore remembered, “being a young guy he always gave me confidence and was always quick to try and make sure I was focused and when I wasn’t focused he’d let me know. That was important…that’s important for any young player, to have a player that has influence in the team to help bring you along.”

But just when we thought the end might be here, Donovan returned to that brash kid who had the confidence of a Navy SEAL on a mission, and told the world “not just yet.” Just a month ago in the MLS Cup – where Donovan had arguably played his best soccer through the course of his career – the US legend scored a hat trick at home (because, of course he did) plus an assist in the second leg of the Western Conference semifinals against Real Salt Lake in a game where coming in the Galaxy needed a win to move on. They won. By a lot.

With the retirement of a legend, the growth of Donovan’s career and parallel growth of the sport in the country will allow the next big US soccer icon to become a mainstream star athlete within the fabric of sports in the United States.

Donovan was once the brightest beacon of hope guiding MLS ships to safety on the rocky and treacherous shore of American sports. Now, as his bulb burns for the final time, he can be content in knowing the waters are becoming safer. Many will come after him and bring soccer to new heights, but for Landon, his greatest gift was one he couldn’t help but give.

“When it’s all said and done, we only get one life – some careers are long, some careers are short – Landon can say he did it his way,” said Twellman. “And very few athletes can say that. I’m not saying it was easy for him by any means, he took some heavy criticism. But when it’s all said and done, I don’t think Landon will have any regrets, and you have to respect the hell out of that.”

By the way, this is Cassiopeia A: 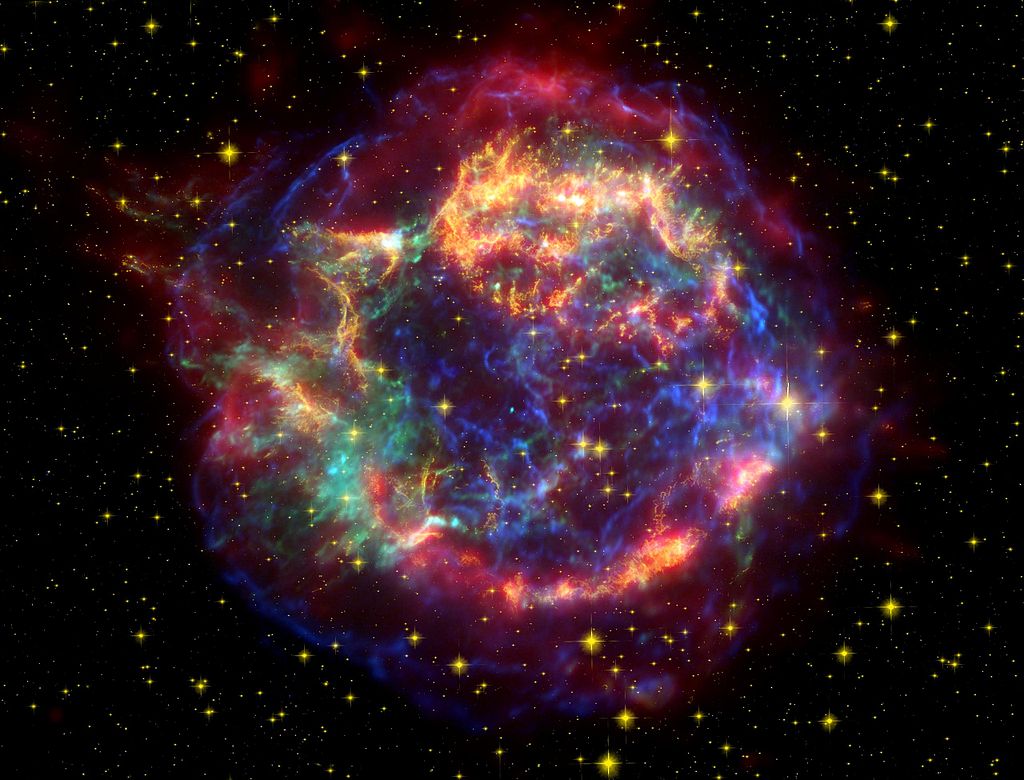 From a kid whose mother, in his first soccer game as a child, was hoping he wouldn’t “get his feelings hurt” we have been lucky enough to witness an extraordinary career. Sometimes when you step back and look at the big picture, the result is pure beauty, even if complicated.

It’s not over for number 10. He told ESPN’s Wayne Drehs that he’ll be coaching soon. But in true Donovan fashion, he was quick to clarify what he meant. “Youth soccer. The pros? I can’t deal with the egos.” Obviously.

Thanks Landon and congratulations on the win, you sure are a LegenD. Now the United States will look for someone new to fill the void in their own way.