It was even more mind-boggling considering this was his second substitution, as he’d already been forced into his first when Chris Smalling went off injured after just 18 minutes.

The Manchester United official Twitter account tried to make sense of the situation, but only caused more questions to be asked.

40’ – Substitution. Ander Herrera comes on for McNair. The change appears to be tactical, with United reverting to a back four. #mufclive

If it is indeed tactical, “Why not just wait until halftime?” mused NBC commentator Arlo White aloud. But nevertheless, United went on to win. It was ugly, but three points are three points. 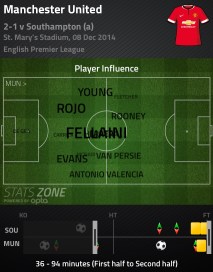 In the video above, Premier League Live analysts Kyle Martino and Robbie Mustoe break down how Southampton used their width to pin back United’s full-backs, leaving them with a back five instead of a back three, and might explain why van Gaal couldn’t wait until halftime to change to four at the back.

The question becomes…who was the back four? With Smalling and McNair off and just one defender in Jonny Evans on, the back line was Evans, Marcos Rojo, Michael Carrick (who slid back from midfield after much gesturing from Herrera), and…….who?

This player influence board to the left (from FourFourTwo, powered by Opta – click it to enlarge) suggests nothing much changed, with Carrick slotted between Rojo and Evans, and the pair of Ashley Young and Antonio Valencia in the advanced wing-back role typical of a three-back formation.

For what it’s worth, Van Gaal attempted to explain his substitution of McNair, suggesting it was more of a mental switch than a tactical change. “He had no confidence, he had given three chances away,” said the Manchester United manager. “It’s very disappointing for me and for Paddy, but I had to because as a manager I am responsible. It’s tough but it’s also in his best interests. I have made a lot of changes and all the boys can survive. It is only one match, one moment in a lifetime.”

What do you think of how Manchester United played in its 2-1 win over Southampton? Watch the video to get Kyle and Robbie’s halftime thoughts.