Borussia Dortmund’s best chance of getting into the UEFA Champions League will be through winning this year’s tournament, but might BVB have to actually worry about top-flight survival more than European honors?

The German powers lost again, this time 1-0 to John Anthony Brooks and Hertha Berlin at the Olympiastadion.  Julian Schieber scored in the 40th minute and USMNT back Brooks picked up a yellow card in helping guide Hertha to the clean sheet.

Jurgen Klopp looked perplexed as to how his team couldn’t find an equalizer, or the win. 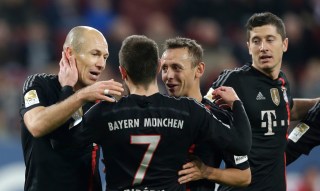 After hanging around for 50-plus minutes, Augsburg fell victim to a Bayern explosion. Mehdi Benatia scored in the 58th minute, then Robben nabbed his first one minute later. Robert Lewandowski scored in the 68th, and Robben completed his brace in the 71st minute. Four goals in 13 minutes against a club that allowed just one per game heading into Saturday? Not bad, Bayern. Not bad.

The Bavarians have a 10-point lead on second place Wolfsburgh before Sunday, and Augsburg sits 15 points behind first-place Bayern.

A thriller at the Weserstadion saw Hannover take 1-0 and 3-2 leads, but 19-year-old Davie Selke netted in the 88th minute to save a point for struggling Bremen, who stay in the relegation zone. Hannover stays in the top half of the table with the draw.