We’re seeing the breakdown of a legend right before our eyes, and it’s proving to be one of the most excruciating components of a painful Liverpool season.

As Steven Gerrard loses pace and accuracy with his career galloping towards its twilight days, he is caught between two worlds. Unable to choose between his remaining abilities and his manager’s instructions, the 34-year-old has produced a season to forget and one which could doom the team he has tirelessly worked for years to elevate.

With a leaky defense plaguing the Reds all last year and into the current campaign, Rodgers has taken Gerrard and moved him from his usual quarterback CM role into the unceremonious yet paramount position of a holding midfielder.

One problem: Gerrard can’t do it. Not anymore, at least.

Having played a central midfield role his entire legendary career and excelled at it, Gerrard is now caught entirely out of his comfort zone, unable to catch up with blistering Premier League attackers streaking towards his leaky back line, and unable to complete a tackle when he does get there.

Prime example: Manchester United’s first goal at Old Trafford today. While the broadcast hosts chided Philippe Coutinho for letting Wayne Rooney go and make a run towards the box, Gerrard was the hidden culprit. While his job is to cover the middle of the pitch in front of the back line, he was caught in no-man’s land, guarding no one and too far from Rooney to stop the run. See:

Gerrard’s first duty as a covering midfielder is to stop these runs, and then move to distribute forward for Liverpool to possess and possibly counter. What is he doing? Gerrard is acres from any Manchester United threat, and thus, Coutinho appears to be the one at fault. You can blame a cornerback for getting burned deep, but if the safety was supposed to help by covering, is the corner really at fault? Different sport, same result.

It’s been like this all season. Gerrard has found himself out of position, and when he’s not, age has sapped his dilapidated body from being able to perform his chief duties. The career Red has completed just 20 of 45 attempted tackles this season (43%), and even that doesn’t convey the magnitude of the problem. The tackles he does complete aren’t in the area he’s meant to cover. Take today: 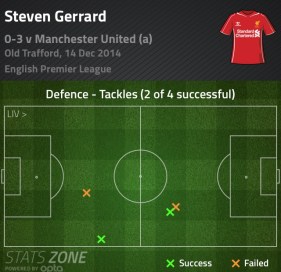 The tackles he has completed are in wide areas, while the ones he misses are in dangerous positions. This leaves an already poor defensive line even more exposed, and it’s turning into goals for the opposition. Furthermore, Gerrard today finished with just a single interception, one block, and no clearances. Those numbers fall right in line with a season average of three defensive actions (blocks, clearances, interceptions) per game.

So if he’s not defending, what is he doing? With even his trademark set-piece brilliance now an endangered species, he’s not doing much. Here’s Gerrard’s board from today, set side-by-side with one of the Premier League’s newest – and best – holding midfielders, Chelsea’s Nemanja Matic. 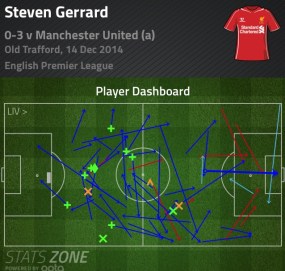 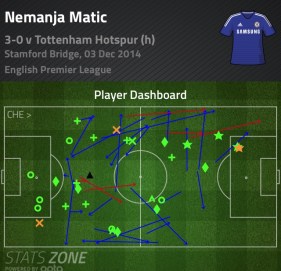 I chose Matic’s performance from the 3-0 victory over Spurs on December 3. Suspensions for both Matic and Cesc Fabregas have forced the Blues to veer away from Jose Mourinho’s preferred style, and it’s no coincidence that Chelsea’s first loss of the season came in Matic’s first miss.

The difference between the two is clear. While Gerrard’s passing percentage is actually higher, there’s a clear direction and process from Matic. He distributes out wide for killer wingers Eden Hazard, Oscar, and Willian to attack. While Raheem Sterling and Adam Lallana down the flanks were Liverpool’s more promising players today, Gerrard struggled with his distribution, proving more erratic and unpredictable than decisive.

Also, compare the defensive actions. Compared to Gerrard’s three defensive actions, Matic piled up a whopping 12 (six clearances and six interceptions) while also winning both his aerial duels and a tackle as well. There’s no comparison. And while that one instance saw Matic snatch just the one tackle, he’s completed exactly twice as many as Gerrard (40 to 20) this season despite an almost identical amount of time on the pitch.

Admittedly, the Liverpool squad is short on players who can play this role. Jordan Henderson is best in the hole, but needs to be paired with a defensive-minded midfielder so he can run forward and create. Lucas hasn’t proven worthy of a position yet, and Joe Allen was given a chance in that spot and didn’t take it either.

But the Reds can’t go on with this kind of play. [This is where I would cite that overused but appropriate old saying about insanity]. Unfortunately for Liverpool, Rodgers has maintained his loyalty for the Liverpool captain. Instead of benching Gerrard for someone with the ability to make tackles when needed, Rodgers made goalkeeper Simon Mignolet the scapegoat, benching him for career backup Brad Jones, who immediately produced an ugly wrong-way dive on the Rooney goal. Sure, Mignolet has been poor this year, but he’s is about fifth on Liverpool’s list of problems this season.

So, Brendan, I urge you to rethink your loyalty. Sure, Steven Gerrard means more to Liverpool than any player in history, and that has Rodgers in an unenviable position. But if he doesn’t act fast, it could cost him the job which just seven months ago earned him Manager of the Year.

You know who Brendan could use? Emmanuel Frimpong!

I honestly think Liverpool Need me … Hit me up on my email Brendan Frimpongforballondor@gmail.com

Well, maybe not, considering Dench couldn’t cut it at League One side Barnsley. Frimpong isn’t the answer, but someone like the player Frimpong was meant to become during his days at Arsenal now seems vital. The Liverpool manager has some serious decisions to make, and his struggling captain is surely top of the list.