For the second-straight season Manchester City and Barcelona have been paired together in the last 16 of the UEFA Champions League.

For the second-straight season both teams will be far from happy with drawing one another. Last year Barcelona prevailed 4-1 on aggregate as Martin Demichelis’ red card in the first leg swung the tie in Barca’s favor and a late Dani Alves goal as 10-man City pushed for an equalizer was the killer. However 12 months on, there is room for optimism if you are a City supporter.

Yes, Barcelona possess incredible attacking talents in Lionel Messi, Neymar and Luis Suarez (bare with me here…) but they are still working out their new philosophy after Luis Enrique took over from Gerardo Martino in the summer. Barca, despite having a vast array of world class attacker, have scored 19 fewer goals than Real Madrid so far in La Liga and have lost two and drawn two of their 15 games so far to sit in second spot four points behind Real.

Enrique’s men have the best defense in the Spanish top-flight as they have conceded just seven goals so far but City will fancy their chances to breach that backline as they hope to have Sergio Aguero back fit for the first leg in Manchester on February 24. City’s boss Manuel Pellegrini has lost 12 and drawn two of his last 14 games against Barcelona but the Chilean will be looking to bag his first win since 2008 against the Catalan club when they come to Etihad Stadium to help set his side up for the second leg at the Nou Camp on March 18.

A man who knows both clubs extremely well is Man City’s director of football and former Barcelona player Txiki Begiristain. He is confident City can overcome the Barca this season. 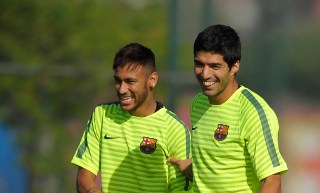 “Every tie in that draw is the same, it’s fantastic, so we’re looking forward to it,” Begiristain said. “We have plenty of confidence with the way we qualified beating Bayern Munich at home and Roma away, so the players will be working hard to get fit and arrive in confidence for those games. We have improved our squad from last season and we have some real quality up front.”

With Aguero spearheading City’s charge after 19 goals in 21 games so far this season, Barcelona are only too aware that facing the Citizens will be even more difficult 12 months on. If Aguero returns and Vincent Kompany is healthy the Citizens will have every chance of beating Barca. The maturity they showed to win away at Rome to seal qualification was immense, they also beat Bayern Munich home in the group stage and with several years of struggles in the Champions League behind them, you get the sense that the penny may have finally dropped for City’s players as to how they can succeed against teams in Europe.

Former Barca goalkeeper and club representative  Andoni Zubizarreta respects the English champions but believes his side can all the way in the competition.

“It is the same draw we had a year ago, it was a very difficult game and we are going to look forward to it,” Zubizarreta  said. “Manchester City have an outstanding squad with a very good coach, a very good team and are very competitive. We know all about them. They have been playing at a very high level and it is going to be difficult. Two great teams with incredible players and anything can happen. Luis Suarez has been performing excellently. Can we go further than last year? Hopefully we can go all the way.”

In a game which will be billed as a head-to-head battle between two diminutive Argentine forwards, Messi took to Facebook and had the following to say about facing City and his good pal Aguero.

“I’m looking forward to playing in the next round of the UEFA Champions League. It’ll be really nice to face my friend Sergio Aguero as I always beat him at FIFA, but let’s see what happens on the pitch.”