Looking back on 2014, it has been an amazing year in the Premier League. From title races, to tense relegation battles and pulsating storylines building at some of the world’s top clubs, we’ve had it all. Here’s an alternative review of he past 12 months in the PL…

Let’s get to the important stuff right off the bat… Roberto Martinez’s brown shoes, Garry Monk’s slick suits and Gus Poyet’s impressive sweater collection are all in the running, but it has to be ‘King’ Louis van Gaal and his massive blazer badges on a pristine suit. The Dutchman exudes confidence and is always looking sharp in his best suit to lambast the media… He keeps it classy. 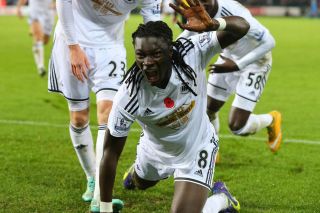 Bafetimbi Gomis’ celebration after scoring a late winner against Arsenal was pretty epic. The substitute headed home the game-winner and while his teammates looked rather bemused, he got on his hands and knees in the rain in south Wales to act like… a panther. The picture above says it all, no caption needed.

Best pies (and, in general, food)

Arsenal. From a press box perspective, the Emirates is like a smooth ride on the Orient Express. Cheese, crackers, fine desserts and the best Fish and Chips in the PL, no wonder why Gunners fans have to pay an absolute fortune for a season ticket. The cuisine is phenomenal. Chelsea’s spread at Stamford Bridge is a close second.

Most outrageous own goal

Santiago Vergini… you didn’t think you would get away without this beauty popping up, did you? Quite possible that this is the best own goal in Premier League history, and it came during an 8-0 defeat.

Manager most likely to switch to WWF

Alan Pardew’s headbutt towards David Meyler proved that if Pards fancies a career after management, the WWF is calling. Hands up who thinks the Newcastle boss can deliver a mean people’s elbow? You don’t want to mess with this silver fox. 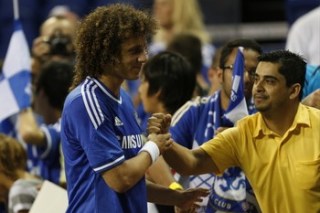 Plenty of candidates here and we have an All-American contender with Geoff Cameron’s finely coiffed barnet, as the likes of Olivier Giroud and Graziano Pelle have followed Geoff’s lead. However, one man’s hair game is far and above the rest. Take a bow, David Luiz. The man who resembles Sideshow Bob from The Simpsons has now left Chelsea for Paris Saint-Germain. But memories of his bouncy, curly and playful hair remain. The stuff of legends.

Few moments which stick out here, but the fan who appeared behind former Manchester United boss David Moyes during his teams 2-0 defeat at old club Everton (which turned out to be his final match) dressed in a Grim Reaper costume and sporting an inflatable scythe has to take the biscuit. Bold behavior Balotelli would have been proud of, which I managed to get a classic snap of.

Here is a picture of said Grim Reaper… Who has just been asked to have his costume removed… Banter. #BPLonNBC pic.twitter.com/AZhDxKQclQ

Best fans in the land

Newcastle United’s supporters are as dedicated as they come, following their team up and down the land and recently they’ve been rewarded with good results. No matter what, the video below is after a seven-hour drive to Southampton to see a 4-0 defeat, they always get behind their team in their thousands and the atmosphere at St James’ Park is incredible. Saying that, Selhurst Park bounces when Crystal Palace are at home and their ‘Ultras’ have brought a breath of fresh air into the PL. Inventive, organized and colorful, impressive support for the Eagles makes Selhurst extra-intimidating.

Four more teenagers made their debut for Southampton this season. Dominic Gape, Matt Targett, Jake Hesketh and Harrison Reed. With the likes of Adam Lallana, Callum Chambers, Luke Shaw, James Ward-Prowse, Alex Oxlade-Chamberlain, Theo Walcott and Gareth Bale coming out of Saints’ academy in recent years, which one of these little rascals is next to hit the big time?