Alexis Sanchez and Tomas Rosicky scored goals on each side of Olivier Giroud’s 53rd minute red card, and the Gunners climbed to within two points of fourth-place Southampton.

Charlie Austin converted a 79th minute penalty kick for the R’s, who are two points above the drop zone and cannot reconcile their away form to match their recent success at Loftus Road.

The clock struck 28 as Green made a flying save to stop a left-footed free kick from Olivier Giroud, as there was little doubt the English keeper was the star of the first half for QPR.

Arsenal simply controlled the first half, with very little working for the visitors. And Sanchez headed in a cross from Kieran Gibbs to make it eight goals in his last 11 Premier League matches. 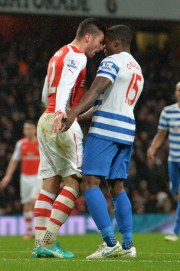 Giroud took a red card for angrily charging at Nedum Onuoha, launching head first into the defender. Onuoha tactically hit the deck and the rest was 10 men for Arsenal.

But it was Arsenal which would score next, with Rosicky clinically-finishing a terrific dribble and pass from Alexis Sanchez in the 64th minute.

QPR got back into the game when Hoilett beat Mathieu Debuchy and went down upon contact. Austin laced the spot kick through Wojciech Szczesny and the game was afoot.

Debuchy then took down Zamora in the box off a wayward cross to no call, and Arsenal survived a nervy final few minutes.