Wayne Rooney scored a pair of goals and set up Robin van Persie for another as Manchester United cruised past undermanned Newcastle by a 3-1 margin.

The Red Devils keep pace with Chelsea and Manchester City in their charge for the Premier League title, still 7 points behind No. 2 and 10 shy of the league lead.

Papiss Cisse converted an 87th minute penalty attempt to ruin David De Gea’s clean sheet, as the Magpies drop to 10th after briefly flirting with the Top 5 earlier this season.

The Red Devils were the better side by far, and Newcastle’s 21-year-old keeper Jak Alnwick didn’t fare well (though he did make some saves). The Magpies started 17-year-old Adam Armstrong up top, and had a trio of untested youngsters on the bench in Haris Vuckic, Freddie Woodman and Lubomir Satka.

Radamel Falcao and Robin van Persie each threatened for the home side, though the most interesting shout came with Juan Mata accidentally tripped Yoan Gouffran in the box with no penalty given. It was certainly not intentional, but you’ve seen it called before.

United found it breakthrough with a gorgeous goal in the 24th minute, as Mata’s cross was met by a sliding Falcao. The Colombian attacked sent the ball through the box to meet Rooney’s perfectly-timed run, and the hosts were up 1-0. 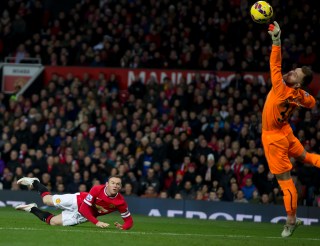 Rooney added a second in the 37th when a controversial Red Devils takeaway came to Mata, who played a beautiful through ball to put his captain 1-on-1 with Alnwick. That was only going to end with a 2-0 score line.

The captain turned provider with a splendid 53rd minute pass for van Persie to finish.

Newcastle picked up a penalty in the 86th minute off a needless foul from Phil Jones, and Cisse coolly slotted it home.