Kevin Mirallas added a goal in the 84th minute, but it wasn’t enough for the visitors to claim a point as Newcastle picked up a 3-2 win.

Newcastle stays above Everton and moves into 9th place on the table with 26 points. The Toffees are in 12th with 21.

Kone 31, had only appeared 7 times for the Toffees since coming from Wigan Athletic in 2013, and was part of a shorthanded Everton side that was without Tim Howard and Phil Jagielka. The Toffees also started the match with Ross Barkley, Kevin Mirallas and Romelu Lukaku on the bench.

But Newcastle wasn’t at full strength either. The Magpies again started 21-year-old third-choice keeper Jak Alnwick, who wasn’t often tested by the Toffees.

Papiss Cisse’s strong headed flick found Moussa Sissoko in on goal, but the Frenchman took a terrible touch and Joel was able to play the ball out for a corner.

Newcastle controlled possession for the next stanza, but Coleman cut to the middle on a counter attack and nearly made it 2-0 in the 24th.

Williamson made amends for his earlier error by playing a cross back for Cisse to wildly side volley home in the 34th minute for his 9th goal of the Premier League season.

The second half saw both teams trading chances, and Joel made a finger tip save to deprive Yoan Gouffran of a 50th minute finish. Everton nearly cleared the ensuing corner, but Cheick Tiote found Perez, who danced around Coleman to fire home. 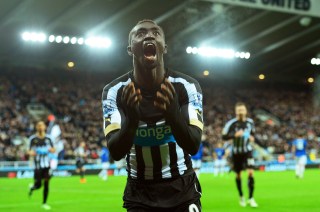 Samuel Eto’o should’ve evened things up in the 63rd minute, but his first-touch left-footer from inside the 18 sailed over the goal.

And Colback gave Newcastle room to breathe in the 68th minute when he was Johnny on the spot for Ross Barkley’s awful touch outside the Toffees’ 18. It was a deserved goal for the engine of Newcastle’s team on Sunday.

But Mirallas made a thrilling run to latch onto a through ball and touch past Alnwick to make it 3-2, and both he and Leighton Baines presided over an 87th minute free kick. Mirallas shot sailed wide of the goal.

Everton continued the press, and it wouldn’t have been a shock if they converted one of several late rushes into an equalizer.