Looking back on 2014, it has been a pretty incredible year for soccer in the USA. With the USMNT’s run to the last 16 in Brazil during the World Cup madness, MLS’s upsurge and Landon Donovan going out a winner with LA, we’ve been spoiled for top moments. Over the next few days at PST, we will be counting down our top 10 from the USMNT and MLS in the last 12 months. Here’s numbers 5-1…

144 goals is a lot of goals, especially for a player who rarely played as a “true striker,” but there stands his record goals tally, 10 ahead of former record-holder Jeff Cunningham, whose tally of 134 goals Donovan broke just three days after the No. 2 U.S. Soccer moment of 2014.

At age 32, Donovan’s 14th MLS season hardly showed any signs of aging as it was one of his very best — 10 goals and 19 assists — matching his greatest output of goals scored and created of his entire career (2008, 20 and 9). He threw in the all-time assists record, a mark no one thought he could possibly reach this year, for good measure with a handful of regular-season games still to play.

I wrote this about Henry last month:

There’s just not much to say when your gameplan works perfectly for 99 percent of the game, and a player whose ability transcends our ability to understand greatness still finds a way to beat you.

That was the 2014 version of Thierry Henry, in a nutshell. Thought he’d lost a step or two of the frightening pace that made him unstoppable in his younger days, Henry still got it done time and time and time again for the New York Red Bulls over the last four and a half years. He was always the best player on the field, even in his final days at age 37.

Beyond his on-field accomplishments during his MLS days, Henry brought a level of respectability to the league, on the worldwide level. His stated intent from day one wasn’t to “relax on a beach.” He wanted to play, he wanted to win. He set the bar extremely high for the next world superstar to come to MLS. 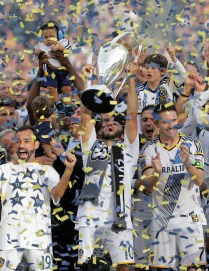 No. 3 — Donovan retires, as a champion

Not only did Donovan go out on top, but he lifted his record sixth MLS Cup right in his back yard, less than an hour from where he grew up and began his legendary soccer career. It’s more about how Donovan chose to retire — 100 percent on his own terms, arguably well before he needed to — that stands out most, though.

Donovan put his need to live a happy life ahead of a begging and pleading soccer nation that would have had him hang around until his 40th birthday, still expecting the same dominant performances of his 20s. He’ll not only go down as the greatest American soccer player of all-time (thus far), but speaking candidly on issues like mental health guarantees Donovan’s impact and legacy will continue to be felt a number years down the road. We salute you, No. 10 with the receding hairline.

Name a story from 2014 that was more widely discussed, scrutinized and celebrated than Donovan being unceremoniously cut from the World Cup roster on May 22. Don’t worry, I’ll wait, but I fear we’ll be here for quite some time.

This is the year that the greatest USMNT career of all-time came to an abrupt end, and as thrilling as the World Cup itself was, when so many think back on the summer of 2014, it’ll be Donovan’s omission and the controversy it sparked that will come to mind and reignite heated debates between the closest of friends five, 10, even 15 years from now.

Was Klinsmann right or wrong to do it? Based on how the USMNT struggle to create chances in Brazil, it’s tough to look back now and say he couldn’t have used the national team’s all-time leading goalscorer and assist provider, even as a game-changing substitute late in games.

In 2010, soccer fans from around the world saw what a thrilling moment like stoppage-time winner in the group stage finale could do to capture the imagination and excitement of a quickly growing soccer nation. There’s no telling how many soccer fans were born that Wednesday afternoon (US time) as the USMNT won the “E.A.S.Y.” group and advanced to the knockout rounds.

Fast forward four years and the USMNT had a similar watershed moment when John Brooks, of all people, scored the game-winning goal in the 86th minute against Ghana, sending bars and living rooms across America in rapturous delirium. I, myself, was one of the millions tuned in that evening, guilty of celebrating wildly inside a jam-packed bar, pouring an entire 32-ounce beer over the head of a very dear friend. World Cups are rare enough on their own. The fact that we’ve been treated to two indescribable moments like the ones mentioned above, in two straight tournaments, makes American soccer fans very, very lucky.