The Premier League title race is neck and neck, with Chelsea’s 5-3 loss to Tottenham Hotspur on Friday raising Manchester City level with the Blues on points, goal differential, goals scored and goals allowed.

Tottenham beat Chelsea for just the fourth time in the last 49 top-flight fixtures between the two.

Harry Kane scored a pair of goals for Tottenham, with Andros Townsend, Nacer Chadli and Danny Rose also scoring in a match that saw Spurs up 4-1 at one point.

And Spurs have moved into fifth-place, leapfrogging Arsenal after the Gunners lost at Southampton.

Diego Costa, John Terry and Eden Hazard scored for Chelsea in the loss. It was only the second time a Jose Mourinho-led team allowed five goals, dating back to a 5-0 loss to Barcelona with Real Madrid).

Two horse-race and the horses are clones pic.twitter.com/mhptf6VNAn

An injury to Ryan Mason forced Tottenham into its first substitution just 14 minutes into the match, as Moussa Dembele came on.

Courtois as called into duty in the 16th minute when Harry Kane attempted an overhead kick from the corner of the six that the Belgian keeper pushed away.

Chelsea’s opener was a thing of beauty, as Courtois spotted Eden Hazard 60 yards downfield and pegged a long throw to his feet. Hazard darted down the field and put a shot off the post. Eventually, Costa tapped home for the goal.

Jan Vertonghen caught a huge break in the 24th minute when his should-be handball in the box wasn’t called. Oscar nearly made it 2-0 anyway a minute later, but his low shot went wide and he caught an elbow to add to the miss.

But Kane would equalize for the hosts, gliding past Oscar and Branislav Ivanovic before using John Terry as a screen and belting a low shot past a diving Courtois. 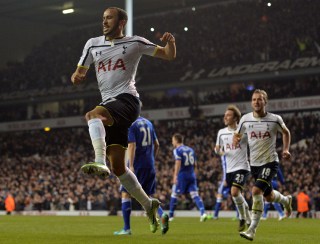 Rose then caught a rebound from the post and slapped it into the goal to make it 2-1 just before halftime. And Gary Cahill caught Kane in the box to set up Andros Townshed for a penalty he converted to make it 3-1.

Kane made it 4-1 early in the second half, as he was again a step too quick for Terry. It was a three-goal lead in the 53rd minute for the hosts against the league leaders.

Then came Hazard, seizing a turnover and linking up for a brilliant 1-2 with Cesc Fabregas that ended with a hard bounding shot past Lloris. It was 4-2, and could it be game on?

Lloris made a diving save on Cesar Azpilicueta to keep things 4-2, but Chelsea was pushing forward.

Only it was Tottenham who would score next, with Chadli shooting in front of Terry again to make it 5-2 in the 78th minute.

Terry made it 5-3 when he followed the play to the back post, tapping in an 87th minute goal.