Things are getting tight at the top of Serie A.

AS Roma picked up a big road win while Juventus struggled to contain the counter of Inter Milan during a Tuesday of Serie A action that saw 24 goals and a fair number of blowouts.

Lukas Podolski made his loan debut for Inter, who looked more dangerous than their 11th place standing.

Carlos Tevez scored his 11th goal of the Serie A campaign for Juve in the fifth minute, but Icardi canceled it out — so to speak — in the 64th.

I Lupi had already made its charge to within a point of Juve by the time the leaders kicked off, thanks to defender Davide Astori’s controversial goal, his first since 2011. Roma out shot Udinese 13-5 and held more than 60 percent of possession.

Up next for Roma: Derby della Capitale. 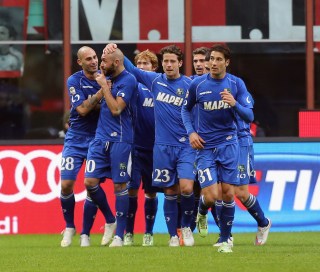 Wasn’t a banner weekend for either big name Milan squad, as the hosts had an early lead through midfielder Andrea Poli but conceded twice afterward.

German-born forward Nicola Sansone made it 1-1 in the 28th minute, and Simone Zaza continued his impressive campaign by picking up his sixth goal in 12 matches for Sassuolo.

Zaza, 23, now has a brace against Roma and goals against Juventus and Milan for I Neroverdi. His breakout started last season and rolled into his first international goal earlier in September against Norway.