The man jokingly referred to as “Pardiola” in Newcastle looked every bit the genius for his new-old club on Saturday.

Palace leaps out of the cluttered drop zone and into 15th with the win, while Spurs fail in their bid to join the top four. Tottenham is in fifth with 34 points.

Christian Eriksen nearly scored his eighth of the season on a half-volley, but his adjustment to the deflected cross made him hit it just wide.

Palace found its threat as the match entered its second half-hour, and Lloris was forced into a beautiful save 1v1 with Murray. 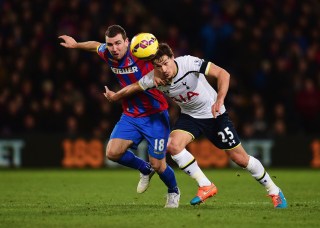 Kane’s goal was offside, but won’t change how Spurs fans feel about another goal from their hero. The Arsenal reject buried a low drive after a few deft touches to make it 1-0 in the 49th minute.

It was Kane’s ninth Premier League goal of the year, and sixth in his last six matches.

That meant Pardew’s men would have to achieve the feat of beating Lloris in order to get a point or better, and that’s proving to be among the biggest challenges in the Premier League.

Lloris was almost always in position to make saves look easy, and did well to stymy a few tough chances as well.

But penalties? Those are harder to stop. Spurs’ Benjamin Stambouli slid to clear a ball and Joe Ledley went down on Stambouli’s follow-through inside the box. Lloris guessed correctly on the attempt, but Gayle clinically hammered it by him.

And then came Puncheon, cleaning up a deflected cross with his left foot to give Palace a 2-1 lead and send up a big roar at Selhurst Park.

Six minutes of stoppage time provided some chances for both sides, with Wilfried Zaha coming close to an insurance tally.