The good news, if QPR supporters can find some after Saturday’s loss at Burnley, is that it can’t get much worse.

The R’s broke a Premier League record for road futility with their 10th straight loss away from Loftus Road, some players got into an altercation with traveling supporters, and manager Harry Redknapp’s squad saw wins from Crystal Palace, Everton and West Brom cast them back into the drop zone on 19 points.

How did we get here, and how much more can go on until the plug is pulled on Redknapp?

As Clint Hill and Richard Dunne were arguing with fans, we found ourselves in a bizarre world where Joey Barton was making the peace. This is what it’s come to at QPR in early 2015, and it isn’t pretty. 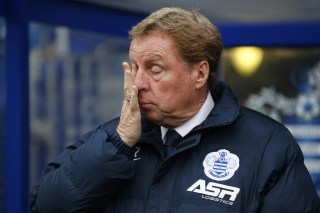 This isn’t to say manager changes often save seasons — they didn’t for Fulham, Cardiff nor Norwich last season — but QPR has a bevy of expensive players who aren’t cutting the mustard. Sure Charlie Austin’s found the net loads, Robert Green’s done work between the sticks, and Joey Barton continues to perform, but the club is in trouble.

Goals are nice, but QPR can’t defend. They’ve kept just two clean sheets since the calendar turned to November. One of those was a 0-0 draw against goal-starved Crystal Palace, and three points were almost a necessity.

Redknapp had orchestrated a trio of home wins before that Palace draw and hasn’t lost at Loftus Road in six. QPR fans can count their blessings that those wins were over fellow strugglers Leicester, Burnley and West Brom.

So can his road woes be excused? This loss to a surging Burnley stings, but the previous five were against the likes of Arsenal, Everton, Swansea, Newcastle and Chelsea. Before that, it was West Ham, Manchester United, Southampton and Spurs. Excusing Manchester City, you could argue they’ve gone into the eight most imposing grounds in the Premier League.

But they’ve gone into them with a bunch of big budget players, and it’s not like chairman Tony Fernandes didn’t spring for talent in the summer. Here are World Cup players like Mauricio Isla and Eduardo Vargas, playing alongside one of last season’s unheralded defending heroes in Steven Caulker. And let’s not forget QPR needed a playoff to get promoted despite outspending the majority in the Championship field .

Even a world-class excuse man like Redknapp is going to be running out of them soon, but should it be excused given the tough road slate? Or with a crucial stretch ahead and Premier League status on the line, should a new boss be given this slow January period to get the R’s house in order?