With Leicester City, West Bromwich Albion, Crystal Palace and Burnley all winning on Saturday, the relegation picture has taken a dramatic twist at the bottom of the Premier League table.

Leicester were previously cut adrift at the bottom and were six points from safety. Now, the Foxes are still bottom but they are just two points from being out of the bottom three, as the entire bottom half has concertinaed. Incredible stuff from the teams at the bottom.

As things stand, just five points separate Everton in 12th with Leicester City in 20th. We are seeing a nine-team relegation battle take place, as between now and May every single game in the PL will hve huge implications.

In recent weeks Leicester and Burnley have recorded valuable wins, as the newly-promoted duo are finding their feet in the top flight. Couple that with West Bromwich Albion grabbing four points from two games since Tony Pulis was appointed as their new boss, and the teams above them are suddenly embroiled in a massive scrap against the dreaded drop.

After Crystal Palace’s shock win over Tottenham Hotspur, they are now on 20 points with Sunderland and Burnley, while West Brom are on 21, then Aston Villa and Everton are on 22. At this time of the season, you would usually expect the form teams to keep climbing up the table and away from danger as they have the momentum. The likes of Leicester, Burnley, West Brom and maybe even Palace, are bang in form and are playing with real belief as they scrap for their lives at the bottom. There’s always one team which drops towards the bottom and can’t recover. Fans of Everton, Aston Villa and Sunderland might be pretty nervous.

Take a look at the bottom half of the Premier League table below. Who would you pick to finish in the bottom three, right now? Plenty of twists and turns ahead. 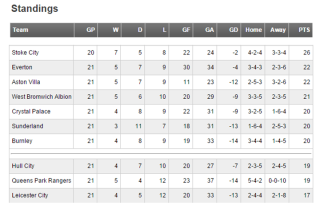