If you thought that Cristiano Ronaldo couldn’t possibly get any flashier with his perfect tan, miraculous abs, gleaming diamond earrings and perfectly manicured eyebrows, then, well, you were wrong.

Hot on the heels of Ronaldo winning his third Ballon d’Or crown and being named the best player on the planet, the Real Madrid superstar will now wear gold boots made by his sponsor Nike, which are encrusted with diamonds to celebrate his hat trick of Ballon d’Or trophies. The boots are named: Mercurial CR7 Rare Gold.

[ RELATED: “Back off Bale” urges Ronaldo ]

See the stunning images below, as Ronaldo will wear them against Atletico Madrid on Thursday in the huge Copa del Rel last 16 clash at the Santiago Bernabeu. Here’s what Nike had to say about the stunning shoes:

“Gold was selected as the main color on the boot because gold is earned. Ronaldo earned his golden award with tremendous play for club and country. As a tribute to Ronaldo’s work ethic, Nike added a special touch to the Mercurial CR7 Rare Gold. For the first time in Nike history, micro-diamonds have been applied by hand to the CR7 logo of the boot.”

He gets it every game, but I’m sure plenty of Atletico players will be roughing Ronaldo up for wearing diamond encrusted boots on Thursday…

[ RELATED: Messi’s future at Barcelona in doubt |  Schneiderlin to United? ]

Then again, he can pretty much do whatever he likes as the 29-year-old is the greatest player on the planet after scoring 52 goals in 43 games in 2014 and dazzling defense with his pace, power and silky moves. 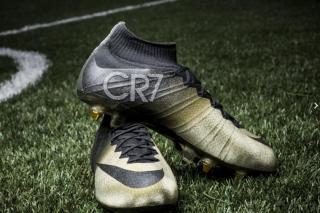 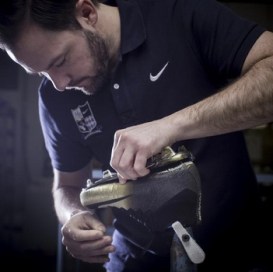 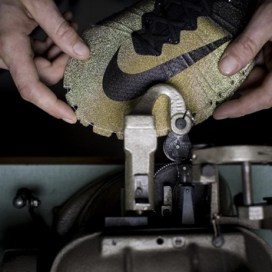