Off the field stories are towering over play on Wednesday at the 2015 Africa Cup of Nations, as pre-match Ebola checks, grenade-attacked viewing parties and fans clashes with police headlined the day.

The Associated Press reports that “hundreds” of fans were involved in pregame fights with police ahead of Equatorial Guinea’s match with Burkina Faso. Fans threw rocks at police, which rarely goes over well, and the officers responded by launching tear gas into the crowd.

Meanwhile on the field, the hosts continue to surprise the tournament. Equatorial Guinea is at the heart of a Wednesday’s duo of matches.

The tournament’s hosts picked up a second-successive draw, and can advance to the knockout rounds if they’re able to beat Gabon in the Group A finale on Sunday.

The sides combined for 27 total shots, but just six were on goal. 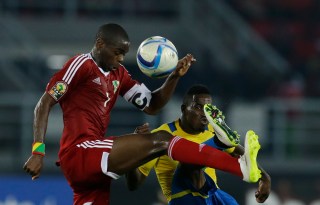 Ladies and gentlemen, nothing is decided in Group A after favored Gabon was stunned by Congo on Wednesday.

How stunning was it? Congo hadn’t won an AFCON match since 1974.

Just after halftime, Congo captain Prince Oniangue (right) took advantage of a lapse in Gabon’s defensive communication during a corner kick and hit a low ball into the goal.

That meant it was game on, with Congo leaping to the top of the group via the power of an opening draw with Equatorial Guinea.