Daniel Parejo, scorer of two first-half goals, was the hero of the day as Valencia (41 points) made easy work of fellow top-four challengers Sevilla (39, with one fewer game played) at Estadio Mestalla. Parejo scored the game’s opening goal (18th minute) from the penalty spot and doubled Los Che‘s lead just past the half-hour mark with a calmly placed finish from 14 yards out.

Carlos Bacca pulled a goal back from the penalty spot in the 36th minute and had a second penalty attempt saved just five minutes later to send the hosts into halftime a goal ahead. Javi Fuego scored the all important insurance goal on 56 minutes when he hit a curled shot past goalkeeper Beto from the edge of the 18-yard-box.

Malaga’s (32 points) own bid for European qualification took a bit of a hit on Sunday as Javi Gracia’s side only rescued a point late on against 13th-placed Athletic Bilbao (20) at Estadio San Mames.

Mikel San Jose put the hosts ahead when he made solid contact with a Markel Susaeta corner kick in the 70th minute. Malaga equalized with a close-range finish from Javi Guerra, who poked home a Miguel Torres cross from three yards out. 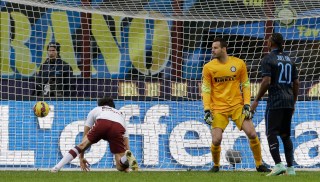 While Juventus (49 points) were handily taking care of their own title-chasing business in stunning fashion (see below link), Rudi Garcia’s Roma (42) were busy struggling to another draw, their third in as many league games.

Mario Gomez put Fiorentina ahead after 19 minutes with an instinctive redirect of a wayward shot. Roma ‘keeper Morgan De Sanctis could do very little about it as the original shot was full of pace and Gomez changed the ball’s flight from nine yards out. Adem Ljajic equalized in the 49th minute, but Roma were unable to find another goal to keep their fading title hopes, which look all but dead now, alive.

Misery loves company, and it’s a good thing, that, because while Inter Milan fans probably snickered at their televisions as AC Milan slumped to a 3-1 defeat on Saturday, they were also well aware things weren’t exactly gold on the blue side of Milan these days, either.

For 93 and a half minutes on Sunday, though, Inter looked a decent side once again as they controlled proceedings against Torino (70 percent possession, out-shooting their opponents 14 to 9) and would have been unlucky to earn only a point for their efforts. And then they lost even that lone point Emiliano Moretti (above, right) scored the game’s only goal with 93:45 on the clock. Sadly, AC Milan and Inter (26 points each) remain locked in a fierce battle for ninth place in Serie A.